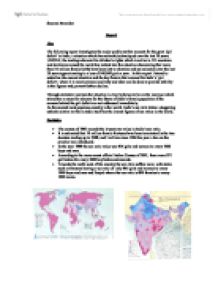 the great girl deficit, in india

Report Aim The following report investigates the major problems that account for the great 'girl deficit' in India, a situation which has noticeably developed over the last 20 years. UNICEF, the leading advocate for children's rights which is active in 155 countries and territories around the world has looked into the situation discovering that more than 10 million female births have been lost to abortion and sex selection over the last 20 years approximating to a loss of 500,000 girls a year. In this report I intend to underline the current situation and the key factors that account for India's 'girl deficit', where it is most common and why and what can be done to provide stability in the figures and prevent further decline. Through statistical analysis the situation is clearly shown to be on the increase which stimulates a cause for concern for the future of India's female population if the reasons behind the girl deficit are not addressed immediately. As the second most populous country in the world, India's sex ratio takes a staggering setback relative to this as India itself has the lowest figures of sex ratios in the world. Statistics * The census of 1991 records the lowest ever value in India's sex ratio. * It is estimated that 10 million female foetuses have been terminated in the two decades leading up to 1998, and 5 million since 1994 the year a ban on the practice was introduced. ...read more.

> Education It has been statistically proven that with increasing female literacy rates there is a significant decrease in child mortality as better educated mothers are less likely to favour boys more than girls. Thus they can maximise their offsprings' life chances because they are most likely to make fuller use of medical facilities. Therefore education and most probably awareness of equality is a factor that contributes to the problem of the girl deficit. > Income levels Surprisingly, when it comes to low income levels this does not become a factor of the problem, however against common expectations, selective abortion is most common among India's elite and richer population as evidence suggests that poorer families discriminate less against girls than richer families do. Richer families can afford many trips to the ultrasound clinics and a covered up abortion of an unwanted girl which leads up to the fact that there is a greater number in abortions in richer communities than poorer ones. For example in the wealthy district of Kurukshetra, the sex ratio is 770 girl babies to every 1000 boy babies. So the concluding point here to take note of is that a combination of economic growth, reduced poverty and modernisation may well pose as a threat to the life chances of female babies and put girls and women at a greater disadvantage. Possible factors that could contribute to the problem There are some factors that do not contribute to the problem such as religion ...read more.

* Awareness Lack of awareness of the consequences of a girl deficit can be considered as the main root of the problem. No doubt if there were advertisements such as notices on billboards or television adverts discouraging selective abortions, or any other means of pointing out the consequences there would be a decrease in the imbalance of sex ratios in regions of India. Therefore one proposal to tackle this problem concerns spreading awareness of the issue and the current situation as well as what the potential future looks like for the children of India and what can be done to resolve the problem. * Education As it has been statistically proven that with high female literacy rates there is a significant decrease in infant mortality. The apparent method that needs to be put forward to tackle this problem would be to encourage more females to maintain an education. However, this brings in to prospect the issue of women's rights and their right to an education. Existing campaigners, such as women's rights activists are already trying to tackle this problem Conclusion The problem of a girl deficit in India seems to be far from being resolved as rising numbers in female foeticides and abortions indicate a deteriorating future for today's generation of children in India. Overall, the government of India is not doing enough to tackle this problem to the best of its ability. Issues such as a firmer ban/fine, awareness and education need to be addressed. Saeema Hawaldar ...read more.