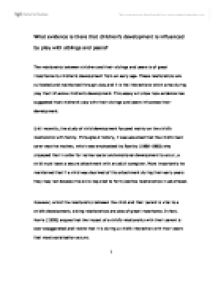 What evidence is there that children(TM)s development is influenced by play with siblings and peers?

who highlight that peers under 3 years have been shown to collaborate and alter their behaviour in order to accomplish tasks and goals. Children's interactions which take place during play can be studied through detailed transcripts of daily observations, however it is important to remember that researchers cannot recall every detail and the interpretation of the transcript may be biased and in the interests of the researcher. On the other hand transcripts such as 'Fluffy the wonderful hamster' (pg 112) which involved two 8 years old discussing a pretend story, can be invaluable in demonstrating that children can construct knowledge and develop understanding together through negotiation, discussion and debate. There are two types of play which have been highlighted by Corsaro (1986) as influencing development. Socio-dramatic play is the term used when play involves acting out 'real life' domestic situations such as making a cup of tea, doing the ironing or even going to the dentist. Stone (1981) further explains that this type of play can be used as a rehearsal for future roles in adult life. Pretend play allows the child to imagine themselves in various roles, which in turn helps them to develop a sense of themselves as individuals and gain a better understanding of the world in which they live. In western societies this type of domestic play is more often associated with girls, who will mimic their mother cleaning up or cooking tea. ...read more.

shows two young boys, William and Calvin, who have both for differing reasons, experienced their early years with limited peer interaction, yet both children have demonstrated that they have developed important social skills which they will require for any future relationships. Furthermore, as the majority of studies have taken place in western societies it is important not to over generalise findings. Different cultures hold their own values and beliefs which will directly affect peer interaction, for example in some cultures, elder siblings are required to go out and work all day leaving little time for any interaction to occur. Therefore it is important that developmental research takes into account the transactional relationship between the child and their environment as this will directly affect their development. This essay has looked at the evidence to show that the interactions which occur between siblings and peers during play influences their development. Children will play together constantly and while they do not see it as a learning process, their interactions will play a vital role in promoting their cognitive, social and emotional development. It is through these interactions during play that children can make sense of the world around them, understand emotions and develop a sense of identity. However evidence has also revealed that although peer interactions are important, children can still develop vital social skills and healthy relationships despite having no peers or siblings, which shows that development may be subject to experience and it is important to take into account the social world which the child grows up in. ...read more.