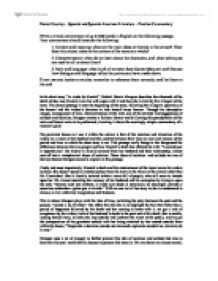 Write a critical commentary of up to 1000 words in English on the following passage.

Your commentary should consider the following:

If you use any books or articles, remember to reference them correctly, and list them at the end.

In his short story “La viuda de Montiel”, Gabriel Garcia Marquez describes the aftermath of the death of don Jose Montiel, how his wife copes with it and how she is treat by the villagers of the town. The chosen passage is near the beginning of the story, following the villager’s ignorance of the funeral and the widow’s decision to lock herself away forever. Through his descriptive images, management of time, characterisation of the wife, use of the narrator and suggestions of solitude and isolation, Marquez creates a fictional dream-world allowing this parody/satire of the male and female roles to be performed, elevating it above the seemingly simple commentary of a woman’s grief.

The prevalent theme as I see it within the extract is that of the isolation and alienation of the widow as a result of her husband and the contrast between their roles as men and women of the period and time in which the short story is set. This passage really brings to the foreground the differences between the two people and how Montiel’s death has affected his wife. “Lacerada por la supersticion”, the widow is literally severed from her husband and their relationship, almost cast off into a metaphorical abyss of isolation. These ideas of isolation  and solitude are two of the key themes Marquez seems to explore in this passage.

Firstly and most importantly, Montiel’s death and his mistreatment of the town leaves his widow isolated. She doesn’t speak to another person from the town in the whole of the extract other than Mr. Carmichael. She is literally isolated within a town full of people, who still seem to intrude upon her life, almost assaulting the memory of her husband and his corruption by trying to open the safe, “Durante toda una mañana, la viuda oyó desde el dormitorio las descargas cerradas y sucesivas ordenadas a gritos por el alcalde.” With no one to tell her story to she is condemned to silence, to live within her imagination and fantasies.

This is where Marquez plays with the idea of time, switching the story between the past and the present, “casada a los 20 años”. The effect that this has is to highlight the fact that rather than a period of happiness followed by the death and her coming to terms with it, we get a lack of acceptance by the widow, both of her husband’s deeds in the past and of his death. She is unable, locking herself away, to make the leap outside and confront the views of the public, and we get the juxtaposition of the gunshots outside with her being attacked by the sounds outside from within the house, “Empezaba a dormirse cuando una tremenda explosión sacudió los cimientos de la casa.”

Marquez uses a lot of imagery to further present this idea of isolation and solitude but also to form this fictional world that he chooses to present this story in. We are shown an almost eternal, dreary, wet October that gives an eerie, supernatural tone to the extract “Octubre se eternizaba con sus lluvias pantanosas”, when combined with the widow’s feelings of being lost and sailing aimlessly through the big, empty house with its Gothic overtones of something a bit ghostly and fantastic, “ella se sentía perdida, navegando sin rumbo en la desordenada y fabulosa hacienda de José Montiel.”

The secondary theme of the relationship between the couple, both before and after, is the other key idea worth mentioning. They were married by choice of her parents, already putting Montiel in the dominant role, being the only suitor allowed close to her. This demonstrates he purity, again making her traditionally in the submissive role, “con el único pretendiente que le permitieron ver a menos de 10 metros de distancia.” It also expands here on her lack of “contacto directo con la realidad” and ideas of her mental wellbeing, leading s to question the reality of the piece and the widow’s identity and sanity. She is defined as ‘la viuda’, she isn’t given a name throughout the whole piece. She becomes a victim of her husband’s crimes, almost being punished for them as well through her seclusion, but as shown in line 5 of the extract, she can’t live without Montiel. Her life isn’t the same, it’s a new one that she can’t get used to. She is lost without him, puerile and incapable of getting by, “comprendió a través de las lágrimas que debía reaccionar, pero no pudo encontrar el rumbo de su nueva vida.” She seems to have psychological depth yet is portraying an archetypal role of the incapable and irrational female in contrast to her husband.

This idea is explored further along with her isolation and the parody of the female through her beliefs in superstition. She doesn’t want an open umbrella in the house, puts all this down to bad luck, prays to death and God and as a result her superstition is another thing that seems to alienate her from the town, “lacerada por la superstición”/” Después de todas las desgracias que tenemos, sólo nos faltaba que usted entrara a la casa con el paraguas abierto.” Carmichael is her only actual physical contact with the outside world, as the house seems almost its own dream-world existing only there and then. The lack of any action taking place outside of it serves to back this up. This idea of the dream-world is important given to the ending of the book and the question of whether or not she is already dead.

When she does actually take to the house again after her self-isolation, almost haunting the place, she seeks to mirror her grief in her surroundings, making things more eerie and supernatural feeling, “, la viuda de Montiel salió del dormitorio para ocuparse de la casa. La despojó de todo ornamento, hizo forrar los muebles en colores luctuosos, y puso lazos fúnebres en los retratos del muerto que colgaban de las paredes.” Marquez also seems to present the idea that the woman is so unable to cope that she is slowly beginning to go mad without her husband with her death appearing to be the only possible exit from this life of torment. Locking herself away, her ideas about Mr. Carmichael’s umbrella and her other superstitions as well as the habit of her biting her nails since being locked away appear to signal some internal turmoil or stress, as well as highlighting her fragility and lack of contact with reality early on.

The 3rd person omniscient narrator works well to create this division between the reader and the widow, adding to the impression of her isolation. It seems unbiased, cold and detached, objective and leans no real direction morally. The narrator doesn’t really pass any judgement that can be seen in this extract, merely presenting us with the world and its characters and leaving us to judge for ourselves, giving more power to the piece by making us consider these people subjectively rather than be told how to feel.

I have come to the conclusion on close analysis of this particular section of the story that Marquez seems on the whole in the extract to be telling a story about men and women most prevalently, and about the rooted beliefs of the weaknesses of women and their irrationality, elaborating on these ideas while exploring ideas of isolation and solitude. He creates a fictitious, ghostly dream-world to allow us to take a step back and look, and using it to play out his parody and critique of men like Montiel and their effects on the lives of others, such as innocent women like the widow. Marquez leaves clues dotted about such as the ghostly abode, supernatural world, ideas of dreaming, death and God and the explosions and gunshots that point us inevitably to the only real conclusion to the story for the widow – her death to be at peace at last.

Related AS and A Level Spanish essays