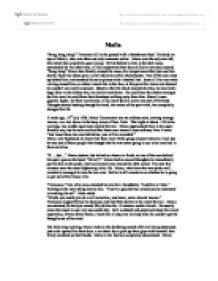 Mafia "Bang, bang, bang!" Francesco fell to the ground with a thunderous thud. His body on top of Fabio's, who was taken out only moments earlier. Marco was the only one left; this attack has completely gone wrong. He hid behind a crate in the dark room, surrounded by five other men, all his compatriots have been killed or seriously injured. "Bang, bang" Marco shot blankly around the room; his inexperienced had just cost him dearly, those two shots gave a clear indication of his whereabouts. One of the men crept up behind him, and smashed his solar plexus with a baseball bat. Soon all five men were circling around him; an elbow struck him in the face, at this point his vision was blurred he couldn't see clearly anymore. Shortly after the attack towards his face, he received a huge blow in the kidney area, he slowly went down. ...read more.

"B.....but..." Marco stutters, but he had no chance to finish, as one of the men behind him put a gun on his head, "Drive!!!" Marco had no second thoughts; he immediately put his foot on the pedal, and accelerated away around the dark corner. The next few minutes were the most frightening in his life. Marco, who knew the area pretty well, eventually managed to lose the two cars. But he is still uncertain on whether he is going to get out of this fiasco alive. "Francesco," One of he man extended his arm for a handshake, "And this is Fabio." Pointing at the man sitting next to him. "You're a good driver; would you be interested in working for us?" Fabio asked. "Maybe you could give us a call sometime, you know, earn a decent income." Francesco slipped Marco his business card and fifty dollars as he exited the taxi. ...read more.

Marco didn't know what to do, because he knew that once he gets involved in the whole Mafia business, getting out will not be an option. Eventually, the word "yes" stuttered out of his mouth. "Are you sure?" Francesco asked in his usual low-pitch, husky voice. "Yes" Marco replied, trying to sound as confident as possible. Half an hour after the phone call, Marco met Francesco in a nearby coffeehouse. Francesco was accompanied by Fabio and three other men he didn't recognize. He was led to a nearby car, and was told to drive to Fifth Avenue at Central Park, South New York. When they got there they were immediately ambushed by a ten men who were armed. "Over there!!" Francesco commanded, pointing at a dark, gloomy building. Marco, Fabio and the other three men followed closely behind. Marco went into that building not knowing that he was never going to get out of that building alive. By James Wihardja ...read more.