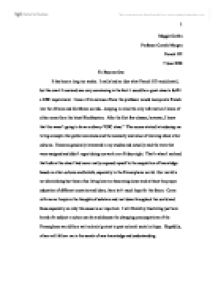 Meggie Gerfen Professor Conteh-Morgan French 152 7 June 2008 To Become One It has been a long ten weeks. I really had no idea what French 152 would entail, but the email I received was very convincing in the fact it would be a great class to fulfill a GEC requirement. I was a little curious of how the professor would incorporate French into the African and Caribbean worlds...keeping in mind the only information I knew of either came from the latest Blockbusters. After the first few classes, however, I knew that this wasn't going to be an ordinary "GEC class." This course started introducing me to big concepts like global awareness and the necessity and value of learning about other cultures. I became genuinely interested in my studies and actually read the texts that were assigned and didn't regret doing my work on a Friday night. That's when I realized that before this class I had never really exposed myself to the acquisition of knowledge based on other cultures and beliefs, especially in the Francophone world. Our world is not diminishing but those of us living here are becoming closer and without the proper education of different countries and ideas, there isn't much hope for the future. Come with me as I explore the thoughts of scholars and real ideas throughout the world and focus especially on why this cause is so important. I will finish by illustrating just how broad of a subject a culture can be and discuss the changing preoccupations of the Francophone world from anti-colonial protest to post-colonial social critique. Hopefully, others will follow me in the search of new knowledge and understanding. Many Americans have been sheltered their entire lives when it comes to learning about different cultures, especially those of the eastern part of the world. Sure, the average American has heard of different religions and cultural values, but is that enough? ...read more.

In some cases, there is an outside influence to the oppression, but in others, it is some form of institution or a widely based idea within that very society. The history of the Francophone literature from the 1940s to the present day describes the changing of oppressors from the outside forces to those actually located within the society or culture. Taking a brief look at some examples of what would be classified as nationalist Francophone literature, our first glance comes from the poetry of Senghor. "New York", a beautiful poem written by Senghor develops the idea of the anti-colonial movement, specifically geared toward the country of France. He refers to the colonial establishment of France within his country to be the "modern" ideal of the world and quickly changes the beneficial thought of modernity into a sickness that envelops everything it touches. He claims that his trip to New York was distressing and that even in all of the turmoil there, the entire area was void of life and freedom, two things that were well stocked in his homeland of Africa. The French believe they are superior to Africa because they are contemporary and well adapted into the ideas of futuristic society but Senghor disagrees that this modernity they hold so high is devaluing their lifestyles because they are missing the basics of life in general. In another poem written by Senghor, he develops anger toward the French government for the manipulative use of African soldiers within their wars. "Luxembourg 1939" is a much stronger poem both visually and literally. As a comparison of both old and new, the old being the way of life before colonialism and the new being life with colonialism, it transfers all of the hate from the hard times to the country that had been colonizing them, specifically those who thought it would be a good move on the political spectrum. ...read more.

When there is a battle against an outside force, the fight is going to be fought until there is a winner and then after that the battle is fought inside the line. There is always a battle fought where there is conflict. It was during the 1940s and up to the 1960s when African countries started fighting for their independence from outside influences like France. Because of this fact, Francophone countries switched from their nationalist view to a more post-colonial social critiquing, just like other countries. I have learned a lot through these past ten weeks and I definitely think it has been worth the time and effort it took in order to better understand the Francophone world. The main component I am taking from this class is that is very necessary for my benefit as both a national and global citizen to learn about different cultures and societies that I might have earlier deemed bizarre and different. Another lesson I will remember from this course will be to understand the changing preoccupations of countries from the anti-colonial way of thinking to the post-colonial version of social critique and also that learning both of these values comes along with time as well. It is also important to keep in mind that the first step toward a better understanding is the ability to keep one's mind open and try to be as less judgmental as possible. Before all other things though, it is important to respect those cultures different than ours and give them the benefit of the doubt that it is a legitimate belief because respect is the only thing most societies and cultures are searching for. I hope throughout the years of growing up in a great country like the United States, I am given ample opportunity to explore the world and different cultures that inhabit it, because after all, if we don't become one the only option left for us is to become lost. ?? ?? ?? ?? 1 ...read more.