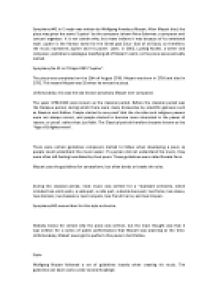 ﻿Symphony #41 in C major was written by Wolfgang Amadeus Mozart. After Mozart died, the piece was given the name ?Jupiter? by the composer Johann Peter Saloman, a composer and concert organizer. It is not certain why, but many believe it was because of its emotional style. Jupiter is the Roman name for the Greek god Zeus- God of all Gods, so therefore, the music represents Jupiter and his power. Later, in 1862, Ludwig Kochel, a writer and composer, published a catalogue classifying all of Mozart?s work, so the piece was eventually named Symphony No 41 in C Major K551 ?Jupiter?. The piece was completed on the 10th of August 1788. Mozart was born in 1756 and died in 1791. This means Mozart was 32 when he wrote the piece. Unfortunately, this was the last known symphony Mozart ever composed. The years 1750-1820 were known as the classical period. Before the classical period was the Baroque period, during which there were many discoveries by scientific geniuses such as Newton and Galileo. People started to see proof that the churches and religious powers were not always correct, and people started to become more interested in the power of reason, or proof, rather than just faith. The Classical period therefore became known as the ?Age of Enlightenment?. There were certain guidelines composers started to follow when developing a piece so people could understand the music easier. ...read more.

Mozart basically stays in C major for the first theme, although at many stages, he uses 1 bar in another key, or tries to fool people into thinking he?s changed into another key. Most of the time, Mozart hints towards G major, but also hints at D minor or C diminished. There is much debate over where the bridge passage is, because unlike most composers, Mozart continues to use ideas from the first theme during the bridge. It is quite clear that the second theme starts at bar 56, so somewhere between the start and bar 56, is the bridge passage. My belief is that the bridge passage starts at bar 24 for the following reasons: 1) This is the most obvious change. There is a pause before it, and the mood and attitude changes drastically. 2) Motive 1 and 2 from the first theme is used, but with a very different attitude. A new counter-melody that hasn?t been heard before is played over the top of this by the woodwinds. 3) After several bars, motive 2 starts to be developed, modulated, augmented and changed slightly. 4) When motive 2 is being developed, the keys begin to change every bar or two bars. During the bridge, we see a musical composition device, called a sequence. It is the one motive repeated and moved up in pitch each time. This starts at bar 39 and goes until bar 45. ...read more.

The first motive of theme 1 is used, and mixed with semidemi quavers, while modulating through keys. The tension and suspense grows and grows, but just when you expect it to explode, Mozart cuts it back down to the quiet modulations on the coda theme again. This coda theme leads us straight into the recapitulation. Recapitulation- -Should be a mirror of the exposition, but all in tonic key (C major) - relieves all tension between themes Although Mozart stays roughly in C major, he ventures out quite frequently, although only temporarily, as if to fool us into thinking he?s changed. For example, when it moves into the bridge, Mozart modulates through several keys before returning back to C for the second theme. The biggest turn from the tonic key during the recapitulation, is in the third theme. Although nothing is stated in sonata form about the structure of a third theme, we would expect to hear it in the tonic key during the recapitulation. This time, the third theme comes back in F minor. Being out of the tonic key creates tension again, which goes against what the recapitulation is suppose to be about, but also by creating this tension again, the coda has a much greater effect, because it is like the calm after a storm. During the coda, Mozart once again hints towards another key, but this time restricts himself to only hinting at the dominant (G major). This gives the piece a greater feeling of a solid end, because of the ?5 to 1? change, or in other words, a perfect cadence. ...read more.