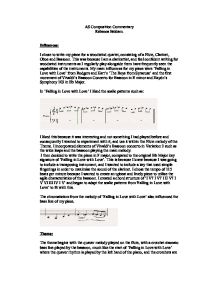 AS Composition Commentary. I chose to write my piece for a woodwind quartet, consisting of a Flute, Clarinet, Oboe and Bassoon. This was because I am a clarinettist

AS Composition Commentary Rebecca Beldam. Influences: I chose to write my piece for a woodwind quartet, consisting of a Flute, Clarinet, Oboe and Bassoon. This was because I am a clarinettist, and feel confident writing for woodwind instruments as I regularly play alongside them have frequently seen the capabilities of the instruments. My main influences for my piece were 'Falling in Love with Love' from Rodgers and Hart's 'The Boys from Syracuse' and the first movement of Vivaldi's Bassoon Concerto for Bassoon in E minor and Haydn's Symphony 103 in Eb Major. In 'Falling in Love with Love' I liked the scalic patterns such as: I liked this because it was interesting and not something I had played before and consequently I wanted to experiment with it, and use it within the Flute melody of the Theme. I incorporated elements of Vivaldi's Bassoon concerto in Variation 2 such as the wide leaps and the bassoon playing the main melody. I then decided to write the piece in F major, compared to the original Bb Major key signature of 'Falling in Love with Love'. This is because I knew because I was going to include a transposing instrument, and I wanted to include a key that used simple fingerings in order to maximise the sound of the clarinet. ...read more.

I thought this was comical as it relates to the bassoon often being referred to as the 'clown of the orchestra', and is often seen within 'Falling in Love with Love' such as in bars 120 and 121. The oboe often imitates within the theme, imitating the flute in bar six and again in bar twelve, creating a call and response structure between them. I liked this as it allows communication between the instruments and develops a relationship within the quartet. The clarinet takes over the melody in section B for four bars, until the flute and oboe come in once more at bar fifteen. The oboe takes the flute melody of bars fifteen and sixteen and uses the technique of retrograde, once more creating a call and response between the two instruments. I chose to use this technique, as it was not something I had used before and upon trying it, believed that it fitted well. The theme ends with a perfect cadence by all the instruments. Variation 1: Variation 1 is written in the relative minor of F major- D minor, with the Italian term 'Espressivo' written at the beginning, telling the musicians to play the piece expressively. ...read more.

I chose to use this time signature, as it was one that I had never played nor written in, and I therefore wanted to explore it. The melody is once again played on the flute much like the theme, in the opening bars. The accompaniment, instead of playing chords and countermelody's, creating a polyphonic texture as seen in Variation 1, builds up by introducing syncopated staccato notes on the oboe, along side dotted crotchets in the bassoon, joined firmly by the clarinet on the third. The bassoon takes over the melody in bar 50, where wide leaps of octaves are used, influenced by Vivaldi's concerto. I chose to do this because the bassoon had not had the melody in any of the piece so far, and I wanted to use this virtuosic technique once more, to emphasise the bassoons agility. The oboe continues it's call and response pattern, except it is now with the clarinet in bars 55 to 57. The clarinet plays the melody in quaver rhythms, taken from the flute melody in the beginning of Variation 2, and the flute plays the melody in the same rhythm as the bassoon previously did during it's solo. I did this because I wanted to use the ideas of developing the main melody, but still hinting at it's original state as shown Haydn's symphony. ...read more.