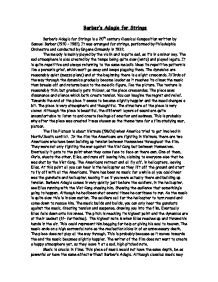 Barber's Adagio for Strings Barber's Adagio for Strings is a 20th century Classical Composition written by Samuel Barber (1910 - 1981). It was arranged for strings, performed by Philadelphia Orchestra and conducted by Engene Ormandy in 1932. The melody is mainly played by the violin and is quite sad, as it's in a minor key. The sad atmosphere is also created by the tempo being quite slow (lento) and played legato. It is quite repetitive and always returning to the same melodic ideas its repetitive pattern is like a person's grief, which won't go away and keeps plaguing them. The dynamics are reasonably quiet (mezzo piano) and at the beginning there is a slight crescendo. 2/3rds of the way through the dynamics gradually become louder as it reaches its climax the music then breaks off and returns back to the melodic figure, like the picture. The texture is reasonably thin, but gradually gets thicker, as the piece crescendos. ...read more.

One of them, Chris, shoots the other, Elias, and runs off leaving him, claiming to everyone else that he was shot by the Viet Cong. The Americans retreat and all fly off, in helicopters, leaving Elias. At this point all you can hear is the helicopter as they lift off the ground and start to fly off with all the Americans. There has been no music for a while all you could hear was the gunshots and helicopter, making it as if you were actually there and building up tension. Barbers Adagio comes in very quietly just before the soldiers, in the helicopter, see Elias running with the Viet Cong chasing him. Showing the audience that something's going to happen. Although he had been shot several times he continues to run. As the music is quite slow this is in slow motion. The soldiers call for the helicopter to turn round and come down to rescue him. ...read more.

The music helped set the mood, tempo and tone of the film. This is not the only war-related programme that Barber's Adagio has been used for. It has helped to create the image of war and suffering to a special 9/11 documentary. Barber's Adagio was used to accompany images of the twin towers before and after. It helps explain how desperate these people who lost their lives were. These pictures would have been nowhere near as effective if they hadn't been accompanied by the music. People remember this and so on the last night of the proms, in the Albert Hall and in places all around the country, they sang this to remember everyone who had lost there lives on 9/11. The atmosphere was incredible and Barber's Adagio brought emotion to everyone. Again this shows how this piece of music creates emotions and feelings, it helps explain suffering and trauma. It is hard not to think of sadness and remember memories of losses, pain and grief when you hear it. The piece is so effective in being so beautiful yet so uncomfortable. ...read more.