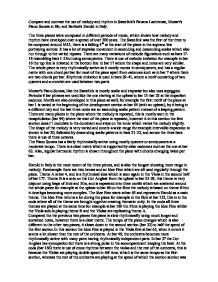 Compare and contrast the use of melody and rhythm in Sweelink's Pavana Lachrimae, Mozart's Piano Sonata in Bb, and Berlioz's Harold in Italy.

Compare and contrast the use of melody and rhythm in Sweelink's Pavana Lachrimae, Mozart's Piano Sonata in Bb, and Berlioz's Harold in Italy. The three pieces were composed in different periods of music, which shows how melody and rhythm have developed over a spread of over 200 years. The Sweelink was the first of the three to be composed around 1615, there is a falling 4th at the start of the piece in the soprano line portraying sorrow. It has a lot of stepwise movement in ascending and descending scales which also run through to the varied repeats. There are many variations of melodic figurations such as bars 17-18 resembling bars 1-2 but using semiquavers. There is use of melodic imitation for example in bar 16 the top line is imitated in the bottom line in bar 17 where the shape and notes are very similar. The whole piece is very rhythmically active as it mostly moves in semiquavers, and has a regular metre with one chord ...read more.

where the start of the piece is repeated, however it in this section the first section doesn't modulate to the dominant and stays on the tonic which varies the melody slightly. The shape of the melody is very varied and covers a wide range for example intervallic expansion is shown in bar 20, followed by descending scalic patterns in bars 21-22, and across the three bars there is use of three octaves. The Piano Sonata has a fairly rhythmically active using mostly quavers or semiquavers at a moderate tempo. There is a clear metre which is supported by clear cadences such as the one at bar 63. Also, regular harmonic rhythm is shown throughout the piece with chords changing twice per bar. Harold in Italy is the most recent of the three pieces, and is also the longest showing more range in melody. Forexample there are two hemes and an Idee Fixe which are all used regularly through the piece. ...read more.

Compared the the previous two pieces this piece is slow rhythmically using much longer and sustained notes, however there is a clear metre. The tempo of the piece changes which is also different to the other two pieces, it slows down in the second section (bar 32) to half the speed of the first section.In this section the Idee Fixe is played in the Viola first at bar 65, when it enters it seems a lot slower than the rest of the orchestra. At bar 49, the orchestra becomes more rhythmically active with many parts having rhythmically independent parts. In bar 37 the Cor Anglias has syncopation but there is a strong pulse in the accompaniment keeping the beat. At the coda (bar 166) there is use of cross rhythms between the violas and the rest of the orchestra, this is because the Violas are playing double speed in 6/8 time, which is the same tempo as the first section, whereas the rest of the orchestra are playing at the speed of which the section section was being played. ...read more.