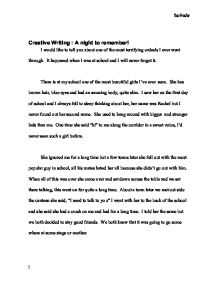 Creative Writing : A night to remember!

Creative Writing : A night to remember! I would like to tell you about one of the most terrifying ordeals I ever went through. It happened when I was at school and I will never forget it. There is at my school one of the most beautiful girls I've ever seen. She has brown hair, blue eyes and had an amazing body, quite slim. I saw her on the first day of school and I always fell to sleep thinking about her, her name was Rachel but I never found out her second name. She used to hang around with bigger and stronger lads than me. One time she said "hi" to me along the corridor in a sweet voice, I'd never seen such a girl before. She ignored me for a long time but a few terms later she fell out with the most popular guy in school, all his mates hated her all because she didn't go out with him. ...read more.

Then she appeared on the stairs. She looked stunning, wearing a blue, silk, slim dress, which fitted perfectly. It was an amazing sight. I didn't believe it was the same girl I was going out with. We had 10 minutes until the Prom opened so we walked slowly along the road and when we got there the building was huge. It had a lot of people out side and music blaring out of the doors. I said "let's go in then" so we did, it was brilliant, music all around us. The entire school was there and the DJ was brake dancing on the stage. I found a few of my mates but the rest were at the bar having a drink because they didn't have a date, poor chaps. I felt quite nervous at the beginning but I got used to it. Then the main song came on so we started to dance, it was incredible. ...read more.

I was coughing badly so I pulled my tee-shirt over my mouth. There was still quiet music in the background. Then I heard crying in front of me. Rachel! I picked her up and staggered out past the burning curtains. Suddenly little explosions were going off behind the bar, cans of coke bursting under pressure. When I got out side everyone started cheering and clapping instantly paramedics rushed over to us. We both went in an ambulance to the hospital to get checked up because we had been in the building for too long. I had my burns seen to, then I went straight to see Rachel in one of the wards. When I found her she looked very uncomfortable and had she had an oxygen mask over her face. She weakly said "Now that was a night to remember" and I agreed. I waited for her parents and then I started to walk out when Rachel's dad said "Thanks for saving her" then I went home. It certainly was a night to remember. Tom Proctor 1 ...read more.