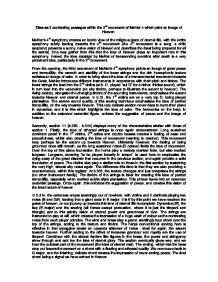 Discuss 3 contrasting passages within the 3rd movement of Mahler 4 which paint an image of Heaven.

Discuss 3 contrasting passages within the 3rd movement of Mahler 4 which paint an image of Heaven. Mahler's 4th symphony creates an iconic view of the religious place of eternal life, with the entire symphony subtly leading towards the 4th movement (the 4th movement is a song; a child (soprano) presents a sunny, naive vision of Heaven and describes the feast being prepared for all the saints). One may gather from this that the idea of Heaven plays an important role in this symphony. Indeed, the idea depicted by Mahler of transcending mankind after death is a very prominent idea, particularly in the 3rd movement. From the opening, the third movement of Mahler's 4th symphony paints an image of great peace and tranquillity; the warmth and stability of the lower strings and the rich homophonic texture radiates an image of calm. ...read more.

displays many of the characteristics similar with those of section 1. Firstly, the idea of ethereal strings is once again demonstrated. Long sustained dominant pedal in the 1st violins, 2nd cellos and double basses creates a feeling of ease and peacefulness, whilst also creating the idea of movement (wanting to resolve). This movement may perhaps be the ascent up towards Heaven. Ultimately however, the feeling of being grounded does still remain, as the long sustained notes (D octave) limits the idea of movement. Over the top of this piano foundation, the horns play a melody marked forte, but also marked langsam. Langsam, meaning "to be played broadly in tempo", is used here to emphasise the dying away of the great disorder that occurred in the previous section, and again provide a solid foundation of peace. The violins also play a similar role to those in the first section by sustaining the very high, almost airy notes again. ...read more.

The strings are instructed to play at will, which creates the impression of a huge wash of colour as the contrasting notes from each player coincide. The wind and brass play a grand, startlingly loud chord over the top of the strings, adding to the texture and timbre. The harps conventional scoring here is effective in that arpeggios create an upwards shimmer of notes - ideal for again, the ascent towards heaven. Further adding to the effect of immense grandeur and royalty are the use of timpani. Combined with the almost fanfare like figures in the brass, the power and stringency show through and add too the idea of eternal glory. The section eventually gives way, and we hear the quietest part of the movement (the idea of eternal rest). The ending, which lets the bass drop out leaves the moment on a chord with a floating and ethereal quality. We now move back to G major, and the finishing, delicate chord creates the impression of never-ending peace; The final chord being a signal we have arrived in Heaven. ...read more.