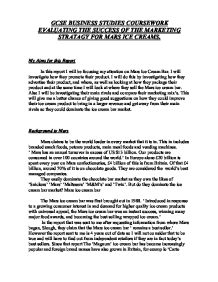 EVALUATING THE SUCCESS OF THE MARKETING STRATAGY FOR MARS ICE CREAMS.

GCSE BUSINESS STUDIES COURSEWORK EVALUATING THE SUCCESS OF THE MARKETING STRATAGY FOR MARS ICE CREAMS. My Aims for this Report In this report I will be focusing my attention on Mars Ice Cream Bar. I will investigate how they promote their product. I will do this by investigating how they advertise their product, and where, as well as looking at how they package their product and at the same time I will look at where they sell the Mars ice cream bar. Also I will be investigating their main rivals and compare their marketing mix's. This will give me a better chance of giving good suggestions on how they could improve their ice cream product to bring in a larger revenue and get away from their main rivals so they could dominate the ice cream bar market. Background to Mars Mars claims to be the world leader in every market that it is in. ...read more.

In the report that was sent to me after requesting information from where Mars began, Slough, they claim that the Mars ice cream bar ' remains a best seller.' However the report sent to me is 4 years out of date so I will not consider that to be true and will have to find out from independent retailers if they are in fact today's best sellers. Since that report The 'Magnum' ice cream bar has become increasingly popular and foreign brand names have also grown in Britain, for example 'Carte D'Or'. To get the information I need I will construct a questionnaire and I will ask the nearest couple of supermarkets for the sales figures relating to ice cream bars. But another part of my report is to look at how they promote their ice cream bar. How Mars Promote Their Ice Cream Bar. ...read more.

This also gives a message to the listener underneath the lines that Mars simply believe that their bars are so much better than anyone else's and it would be stupid and embarrassing to eat any other kind of ice cream bar. This particular advert was put out on the airs in June 2000 and is not running any more but it must have been good as it has stuck in my head all these months ahead of any others I have listened to recently. Mars does not use billboards as much as T.V. or radio. I have been told because not as many people pay attention to them nowadays, as there is so many around and they don't stand out to people as much as they did when they were first introduced. The few boards that they do use have linked up with the T.V. adverts, where the picture shows an attractive person in a big house eating a Mars ice cream bar. ...read more.