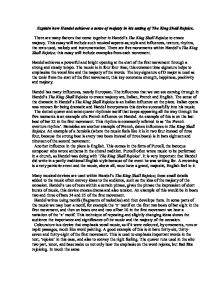 Explain how Handel achieves a sense of majesty in his setting of The King Shall Rejoice.

A good example of this is in bars thirty-six, thirty-seven and thirty-eight of the first movement. This is used to emphasis important words in the text, 'rejoice' in this case, and also to convey the right feeling. The quaver runs used in the alto two part, tenor, and bass make us not only hear the emphasis on the word rejoice, but feel like rejoicing. In much the same way, melismatic writing emphasizes syllables as they are held over many notes, an example of this is in bar forty-two of the first movement. Ornamentations such as trills are an example of virtuoso writing. They decorate the music and make it grander to emphasize the majesty of the occasion. Trills can also add to the tension of a passage of music, if the phrase is building up to a climax this can be aided by the use of trills. Suspensions and Anticipations in the music also add to the tension, drama and majesty of the piece, an example of a suspension is in bar thirty-seven and thirty-eight of the second movement. The rhythms used in the music can communicate emotions from the composer. For example in the second movement, Exceeding Glad Shall He Be, Dance rhythms are used to tell us what a happy joyful and dance worthy occasion this crowning is! ...read more.

The thin texture in the second movement allows the continuo group to be heard clearly and contrasts well to give a different, but still majestic feel to the second movement. In the third movement (Glory And Great Worship) the texture is homophonic; this conveys majesty, glory and a sense of the magnificent. Colouratura is used in the first three bars; the scalic ascending patterns in the strings not only embellish the D major chord, but also represent the King rising to heaven. At the end of the third movement the last two bars are Adagio, to proclaim majesty in the end of the movement. As well as this, the movement finishes on a Phrygian cadence which sets the stage for the tonic minor (B minor) used in the fourth movement. The fourth movement (Thou Hast Prevented Him With The Blessings Of Goodness) is in the tonic minor, B minor, the only minor mode movement in the anthem. This movement has a fugal and often contrapuntal texture, an example of this is in bars twenty-three and twenty-four of the fourth movement. In the fifth movement (Alleluia) the texture is thick and contrapuntal, this heralds the end of the anthem and accentuates the name of the movement 'Alleluia', this word, meaning 'praise the lord' has a double meaning; the audience is encouraged to both praise god and praise the king. The word is repeated through out the movement for effect and emphasis of the majesty of the occasion and importance of the word. ...read more.