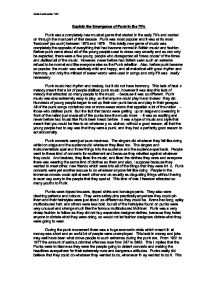 Explain the Emergence of Punk in the 70's

Explain the Emergence of Punk in the 70's Punk was a completely new musical genre that started in the early 70's and carried on through the most part of that decade. Punk was most popular and it was at its most 'hardcore' (as such) between 1975 and 1978. This totally new genre of music was completely the opposite of everything that had become normal in British music and fashion. Before punk came about all of the young people used to dress vary smartly and as can only be expected, there were a few young people who disregarded all 'dress codes' of the times and disliked all of the music. However, never before had Britain seen such an extreme refusal to be normal and like everyone else as the Punk rebellion. Also, before punk became so popular, the music was relatively mild and happy, and all melodical with good rhythm and harmony, and only the mildest of swear words were used in songs and only if it was really necessary. ...read more.

Punk concerts were yet another excuse to do whatever anyone felt like doing. People in the immense crowds could spit at each other and do equally as disgusting things without having to even say sorry to the people that they spat at. This kind of total freedom attracted so many youths to Punk. Punks wore ripped trousers, ripped shirts and bondage pants. They also wore clashing patterns and colours. They wore safety pins practically anywhere they could pin them and their hairstyles were just about as different as they could be. Some had long, spiky multicoloured hair, and others were less bold, but all of the hairstyles found on punks were very unusual and strange much like the famous multicoloured Mohican. Punk was a very cheap fashion to follow as they did not buy expensive designer clothes, because they hated anyone to dictate what they were doing, so would not let fashion designers dictate what they were going to wear. During the punk movement there was a huge economic crisis which meant that money was short and an awful lot of people were unemployed. ...read more.

This is just a small example of how oblivious to everyone else in the country who was turning up their noses in disgust at them the punks were. They lived for themselves and for having fun and they ruled their own lives, no one else did at all. Punk did not take off in America for a lot of reasons. Firstly, there was no economic crisis in America so their unemployment rate was high and they had all of their usual wages, so morale in the USA must have been quite high during the punk era in Britain. Another reason that punk did not take off in America was because it did not have a Monarchy. The Monarchy in Britain was the main thing that the punks rebelled against. Lastly, most of the American citizens still liked all of the bands that had been around for a long time, like the Bay City Rollers etc. so they were still getting what they wanted from music, so why would they want to turn to new bands - they were happy with the bands that were around. Amie Lenkowiec 10H ...read more.