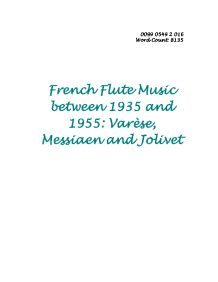 French Flute Music between 1935 and 1955: Var&amp;egrave;se, Messiaen and Jolivet

0099 0549 2 016 Word Count: 8135 French Flute Music between 1935 and 1955: Var�se, Messiaen and Jolivet Table of Contents Page Acknowledgements 3 Preface 4 Chapter One: Traditions of the solo flute 5 Chapter Two: The Impact of French and other Predecessors: Debussy and Stravinsky 10 Var�se 10 Messiaen 12 Jolivet 15 Chapter Three: Beyond Music 17 Var�se 17 Messiaen 19 Jolivet 22 Conclusions 28 Bibliography 30 Acknowledgements This dissertation would not have been possible without the help of lecturers at Keele University and without the continuing support of my family and boyfriend. Thanks, first of all, are due to Barbara Kelly and Rajmil Fischman in the music department of Keele, both of whom guided me and kept me on track and also Deborah Mawer of Lancaster University who was a great pillar of strength when it came to Jolivet. Secondly, a very special thanks to my parents and Phil, without whom I would have gone quietly insane and given up a long time ago. Thanks also to my fellow students who read several drafts and gave me advice whilst writing their own dissertations. Thank you everyone. Preface This study originated in my interest from the perception of twentieth century music, particularly the flute music of Olivier Messiaen (1908-1992), Edgard Var�se (1883-1965) and Andr� Jolivet (1905-1974). I imagined that the studies already done on these composers would provide me with an analytical and historical view of their works and lives. Early in my study it became apparent that very little study had been completed on Andr� Jolivet in general. There are also only small amounts written on the individual works that I have chosen to study by the selected composers. The main works that I am concentrating on are Density 21.5 by Debussy, Le merle noir by Messiaen and Jolivet's Cinq Incantations. When reading this thesis it must be remember that, although Var�se was born in France, he emigrated to America in 1915 when he was thirty-two and Density 21.5 was not written till 1936 so can be classed as part American. ...read more.

After Var�se's move it was to be Messiaen's chance to mentor Jolivet and this began in 1931 shortly after Messiaen heard Jolivet's Trois Temps pour Piano written in 1930. On hearing this piece Messiaen gave Jolivet exceptional credit as a composer. Messiaen was influential on Jolivet and as they became friends it followed that they had similar interests in spiritual and religious matters. Cinq Incantations draws on different aspects of other composers music including Le Sacre by Stravinsky, Syrinx by Debussy and Density 21.5 by Var�se as Mawer asserts; Christian allusion is at least implicit in the second and fourth pieces; 'serene communion' also suggests commonalty with Messiaen and the celebration of the earth's fecundity a spiritual kinship with Stravinsky's Le Sacre. 'Incantation' denotes a ritualised recitation of magical text, as in the creation of a spell and, beyond this, the work exists within the rich tradition of solo flute writing: Debussy's Syrinx (1910), Honegger's Danse de la ch�vre (1921) and Var�se's Density 21.5 of the same year, 1936.13 Also similar to Messiaen's techniques is the relation of music and text, with titles of each movement providing information about the music. One of the most common aspects of Cinq Incantations that maps out similarities with Density 21.5 is the extreme use of the range of the flute. Both composers use this technique often in close juxtaposition. Messiaen also uses this technique in Le merle noir but not to the extent that Jolivet and Var�se have. Beyond Music This chapter consists of analyses of Var�se's Density 21.5, Messiaen's Le Merle Noir and Jolivet's Cinq Incantations. It will look at the themes surrounding the works, different structures and rhythms along with a step by step close analysis. Var�se Edgard Var�se's Density 21.5 comes equipped with footnotes to give a general explanation as to how it should be performed. It includes a description of the title explaining that 21.5 is the density of platinum and that the piece of music was written at the request of Georges Barrere for the inauguration of his platinum flute. ...read more.

Although the same composers throughout some of their musical career influenced Var�se, Messiaen and Jolivet they also influenced each other, which gives a reason as to why their music contained so many similar aspects. One of the main points that needs to be reiterated throughout this thesis is that at the time of writing Density 21.5, Var�se had emigrated to America. He is generally classed as an American composer of French origin yet his work is full of French traits that he took with him to America. Density 21.5 is one of Var�se's most famous compositions and is a popular piece chosen by flautist's to perform. Messiaen's Le merle noir is not so popular. It is on the Associated Board's Performance certificate list for flute players due to how difficult it is to master. Experts rarely discuss it, perhaps because it was his first experimental bird song and the others that followed have proved more popular. Cinq Incantations are five specialised pieces that are hard to conquer but are important to Jolivet as each symbolised different aspects of his life and a flute player picks up on this portrayal when performing them. Further study of Var�se's, Messiaen's and Jolivet's thoughts, opinions and music would be aided by all their interviews, lectures and books being translated and published in English. Not much study appears to have been done in English, to date, on Andr� Jolivet so resources are limited making some parts of his musical career hard to follow. Many questions, which continue the work of this dissertation, remain to be answered. The study in this thesis is aimed at making readers aware of the flute music of three amazing French composers of the twentieth century and to give them a knowledge of three specific compositions. If this work has succeeded in its purpose then it, above all, will enable listeners to speed up the process of understanding Var�se's Density 21.5, Messiaen's Le merle noir and Jolivet's Cinq Incantations by directing their attention to influences and significant features of their works. ...read more.