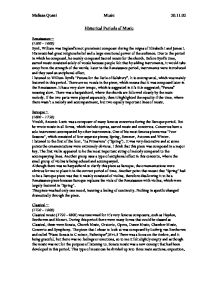 Historical Periods of Music Renaissance ~ (1500 - 1600) Byrd, William was England's mot prominent composer during the reigns of Elizabeth I and James I. His music had great religious belief and a large emotional power of the audience. Due to the period in which he composed, he mainly composed Sacred music for the church. Before Byrd's time, sacred music consisted solely of vocals because people felt that by adding instruments, it would take away from the strength of the words. Later in the Renaissance period, instruments were introduced and they used an antiphonal effect. I listened to William Byrd's "Pavana for the Earle of Salisbury". It is contrapuntal, which was mainly featured in this period. There are no vocals in the piece, which means that it was composed later in the Renaissance. It has a very slow tempo, which is suggested in it's title suggested; "Pavana" meaning slow. There was a harpsichord, where the chords are followed closely by the main melody. If the two parts were played separately, then it highlighted the equality if the time, where there wasn't a melody and accompaniment, but two equally important lines of music. ...read more.

The piece that I chose to look at was composed by Ludwig van Beethoven and called "Piano Sonata in C minor, Pathetique",Mvt.3 There was a focus on the timbre, and it being graceful, but there was no feelings or emotions, so to me it felt slightly empty and as though the music was not for the purpose of listening to. Sonata music was a new concept that had been developed in this period. This type of music can be divided up into three main sections; exposition, development and recapitulation. I could hear this in the piece, because to start with, there were two main themes, that were clearly different and then these two themes went onto to be developed into two new themes. Finally I could hear the original themes being repeated. The tempo of the piece is constant and very fast. The tone was homophonic, which made it very precise and all movement of the music was made together. This upheld the gracefulness of the music. ...read more.

There are many types of modern music; Impressionism, Surrealism, Neo-Classical, Minimalism, Atonalism and Electronics. The changes of the times influenced largely the music, which was produced. I found a electronic piece of music by Karlheinz Stockhausen, called "Song of the Young Men" This type of music could only be in the class if it was composed after the 1950s due to the need for the technology that it required for it to be composed, recorded and preformed. The piece is telling a story, but it is very hard to understand it as it is very complicated and you are focusing mainly on the diversity of the sounds compared to 'normal' compositions. There are strings, flutes and a piano, which sound polyphonic and at some points clashes, because so much is going on. Although form what we here, we maybe led to believe that the piece is being preformed by a small group, it is normally just one person playing one instrument to a track of themselves, they had previously recorded and altered. Even though the pieces sound quite complex, it is likely that they are in fact simple parts, edited and put together to give the impression of complexity. Melissa Quazi Music 20.11.02 ...read more.