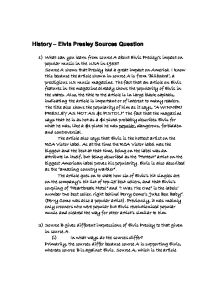 History - Elvis Presley Sources Question 1) What can you learn from source A about Elvis Presley's impact on popular music in the USA in 1955? Source A shows that Presley had a great impact on America. I know this because the article shown in source A is from 'Billboard', a prestigious US music magazine. The fact that an article on Elvis features in the magazine already shows the popularity of Elvis in the states. Also, the title to the article is in large black capitals, indicating the article is important or of interest to many readers. The title also shows the popularity of him as it says, "A WINNER! PRESLEY AS HOT AS $1 PISTOL!" The fact that the magazine says that he is as hot as a $1 pistol probably describes Elvis for what he was, like a $1 pistol he was popular, dangerous, forbidden and controversial. The article also says that Elvis is the hottest artist on the RCA Victor label. As at the time the RCA Victor label was the biggest and the best at that time, being on the label was an attribute in itself, but being described as the "Hottest" artist on the biggest American label proves his popularity. ...read more.

The picture shows Elvis dancing suggestively as described in the newspaper articles. However, source F is not necessarily reliable as it only captures one moment in time although the other sources do suggest that the suggestive dancing is continuous throughout concerts. Source E however, is contradicting source B as source B says that Elvis shouldn't have been allowed to appear on the television but the show topped all of the TV ratings. The reason that source E contradicts B is because E is written for an American TV and radio magazine so they are more interested in ratings. The reason that the ratings were so high was probably because a lot of people would have watched it because there was so much controversy surrounding him and people wanted to see what it was all about. 4) Study source G. Use your own knowledge to explain why these different views were expressed. Emmanuel Cellars, who was a Republican Politician disapproves of Elvis and says that Rock 'n' Roll should be sung by black people. Cellars expresses a white, conservative, racist point-of-view. There was still a lot of racism around, especially in the south of America where Elvis was from and he obviously believes that doing "Black Music" is not good enough for a white person and it will somehow drag ...read more.

his "primitive physical movement" made white children more interested in him and, as they may have believed, more likely to support black people. When Elvis was on the Milton Berle Show, the ratings topped all other TV shows. This shows that the controversy of him attracted viewers. People wanted to see what it was about so they watched the show and he gained more fans. Many of the sources claim that Elvis's popularity is due to controversy and children wanted to rebel and Elvis backed this up. At the height of his popularity, Elvis was making many hits and albums and even films, all of which were very popular. Although without the controversy Elvis would still have been popular (as source A shows because it was written before TV appearance), but he would have had a lot less press and less press means less people know about you so not as many people buy your records. I think a lot of his success is also due to the fact that before Elvis you were either a child or an adult; there was no in-between. Elvis created teenagers and encouraged them to be who they are and rebel against authority. The teenagers could relate to him and listened to his music to rebel against their parents. By Lucy Anscombe. 10N. ...read more.