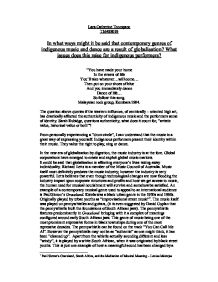 In what ways might it be said that contemporary genres of indigenous music and dance are a result of globalisation? What issues does this raise for indigenous performers?

Lara Catherine Thompson T16438019 In what ways might it be said that contemporary genres of indigenous music and dance are a result of globalisation? What issues does this raise for indigenous performers? "You have made your home In the streets of life You'll take whatever...will come... Then put on your shoes of blue And you immediately dance Dance of life... So follow this song. Malaysian rock group, Kembara 1984. The question above queries if the western influence, of centrically - oriented high art, has drastically affected the authenticity of indigenous music and the performers sense of identity. Sarah Rubidge, questions authenticity, what does it count for, "artistic value, historical value or both"? From personally experiencing a "drum circle", I can understand that the music is a great way of expressing yourself. Indigenous performers present their identity within their music. They value the right to play, sing or dance. In the new era of globalisation by digestion, the music industry is at the fore. Global corporations have emerged to create and exploit global music markets. It could be said that globalisation is affecting everyone's lives taking away individuality. ...read more.

Opening up oppertunities on the local market for blacks, since most of the music industry within South Africa is dominated by whites. Robert G. Smith has been a music educator for forty years. He has taken a particular interest within Maori music due to his New Zealand heritage, "I spent almost five years as the national music advisor in the Fiji Islands. Subsequently my music education career has been a short love affair with indigenous music's, in the Pacific, North and Central America, east Africa, back again to New Zealand and across the past two decades, apart from a recent sojourn as International Music Consultant in Sri Lanka, here in the Northern Territory of Australia". Smith believes tat we need to realise the impact of cultural beliefs as they affect music creation performance and the contexts for music. A very practical definition of culture suggests that music like most other cultural artefacts, informs us 'how things are done around here'. Smith also explains what an important part of Aboriginal society and life music is. An Aboriginal child's education is centered around music. ...read more.

Such analyses "consider the Other in the context of the world political economy". Even though it can obviously be seen that issues of identity are under pressure due to globalisation, some of the music producers from the West have understood this. In December 1991 during an interview Mandawuy Yunuping stated his wish to work alongside World Music producers and musicians Brian Eno and Peter Gabriel, he said that they respected the issue of not loosing the magic that the Aborigines already had within the music. Not all music producers respect this changing the meaning, rhythm and the language of the music. A positive aspect of World Music is what it states as its main objective is allowing other people from all over the world to experience different types of music. However the question remains are the music producers learning to respect authenticity, purity of music and the importance it has within the indigenous people's way of life. We might note that recording companies and media organisations are known more for their exploitation of artists than their defence of artist's interests. Through their short sighted arrogance and greed the major label media conglomerates are sowing the seeds for their own destruction. ...read more.