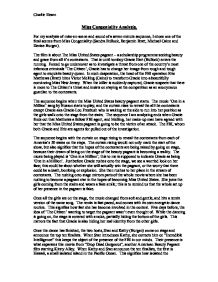 Miss Congeniality Analysis. For my analysis of mise-en-scene and sound of a seven-minute sequence, I chose one of the final scenes from Miss Congeniality (Sandra Bullock, Benjamin Bratt, Michael Caine and Denise Burgen). The film is about The Miss United States pageant - a scholarship programme seeking beauty and grace from all it's contestants. That is until tomboy Gracie Hart (Bullock) enters the running. Forced to go undercover as to investigate a threat from one of the country's most infamous criminals 'The Citizen', Gracie has to change her image from rough and tough agent to exquisite beauty queen. In such desperation, the head of the FBI operation Eric Matthews (Bratt) hires Victor Melling (Caine) to transform Gracie into a beautifully convincing Miss New Jersey. When the killer is suddenly captured, Gracie suspects that there is more to The Citizen's threat and insists on staying at the competition as an anonymous guardian to the contestants. The sequence begins when the Miss United States beauty pageant starts. The music 'One in a Million' sang by Busson starts to play, and the curtain rises to reveal the all the contestants except Gracie aka Gracie-Lou Freebush who is waiting at the side to run into her position as the girls walk onto the stage from the stairs. ...read more.

This signifies how fast she has become involved in the contest. Five days before, the idea of 'The Citizen' wanting to target the pageant wasn't even thought of. While the dancing is going on, the stage is covered with smoke, partially hiding the bottom of the girls. This mirrors the fact that Gracie is also hiding her real identity from the other girls. Once the dance has finished, the two hosts, Stan and Kathy (Burgen) come on stage and announce the top ten finalists. When Stan introduces Kathy, she corrects him on "Incredible Intelligence" this keeps the object of the presence of the FBI in our minds. Their presence is what separates this movie from "Drop Dead Gorgeous", another American Beauty Pageant film starring Kirsty Alley. When Kathy and Stan announce the ten finalists, the first is Hawaii, a small isolated island in the Pacific Ocean. This signifies how isolated the contestants are. Even though face to face, the girls are friendly and civil, behind each others backs, the bitch about each other and this is what makes them isolated, because any acts of friendship are false. ...read more.

The soundtrack to this seven minute sequence is very fast paced and rolls right the way through the actual pageant, however, when there are scenes at the airport with Matthews and Melling, the music disappears, and we hear the information that leads Matthews to rush back to Gracie's side. The title track of the movie also features in this sequence. 'One in a Million' is what all 50 contestants have to dance to when opening the show. Other pieces of music are played when Michelle is on stage twirling her batons, and the title and credits music to The Miss United States pageant. As there is not much talking, the volume of the music has been placed higher than it would be if there was speech involved. But as there is no dialogue, the volume gives the viewer more of a real perspective and they are being invited to feel as if they are in the 'Alamodome' watching the final of the pageant live. The balanced sound levels ensure that when the scenes cut from San Antonio 'Alamodome' to the airport, the difference isn't too noticeable with abrupt endings in the music or dialogue in the film. Charlie Hearn ...read more.