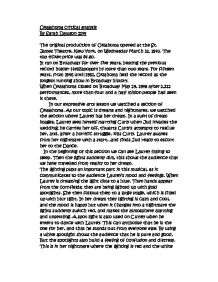 Okalahoma critical analysis By Sarah Dawson 11v4 The original production of Oklahoma opened at the St. James Theatre, New York, on Wednesday March 31, 1943. The top ticket price was $4.80. It ran on Broadway for over five years, besting the previous record holder Hellzapoppin by more than two years. For fifteen years, from 1946 until 1961, Oklahoma held the record as the longest running show in Broadway history. When Okalahoma closed on Broadway May 29, 1948 after 2,212 performances, more than four and a half million people had seen it there. In our expressive arts lesson we watched a section of Okalahoma. As our topic is dreams and nightmares, we watched the section where Laurey has her dream. In a swirl of dream images, Laurey sees herself marrying Curly when Jud invades the wedding; he carries her off, thwarts Curly's attempts to rescue her, and, after a horrific struggle, kills Curly. Laurey awakes from her nightmare with a start...and finds Jud ready to escort her to the Dance. ...read more.

When other characters enter (cowboys and farm workers). The melody changes, to beaty and relaxed. Then as Curley enters and they begin to dance the music become twinkley, and magical. Then as the scene skips to her wedding the music changes. They use bells to show the audience that she is getting married. The music is still very positive and cheerful, but as she opens her eyes she does not find curly but Judd. At this point the music is built up and suddenly changes into a haunting melody as her dream transforms to a nightmare. The melody is in minor key and uses lots of low string instruments e.g. cello. This is to show the audience the change between the nightmare and the dream. Gradually the music changes into a honky tonk, like an out of tune piano. The music's more lazy and sleazy as the dancing girls and cowboys enter. After the dance sequence, curly enters and a fight sequence begins, Laurey starts to panic and wants to escape, so at this point a lot of drums can be heard. ...read more.

When she is dancing solo and with the farm girls they dance in unison, to show they are together and under control. They use lots of turns, and leaps. They also use a lot of ballet movements. This shows the audience a calm, flowing and graceful dream. In the dance with the showgirls, they are all dancing separately with separate movements. They use lots of flexible movements, and balances. This can show the audience that they are separated and unorganised. When she dances the waltz with curly they use lots of lifts, turns and graceful movements, on the other hand when dancing with Judd she is being thrown around and manipulated like a rag doll. This also shows another contrast, which may relate to the contrasts in dreams and nightmares. The musical communicated to the audience her feeling and emotions through other means than verbal communication. They show it mainly through lighting, movement, and music. It relates to dreams and nightmares as is seems rather peculiar. The music seems out of tune and distraught. And strange things and people appear throughout to make the dream seem realistic. This critical analysis will help me to relate to dreams and nightmares throughout my performance without talking. ...read more.