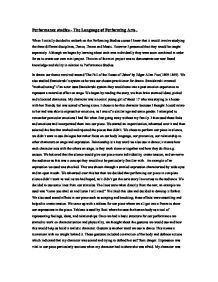 Performance studies - The Language of Performing Arts . When I initially decided to embark on the Performing Studies course I knew that it would involve studying the three different disciplines, Dance, Drama and Music. However I presumed that they would be taught separately. Although we began by learning about each area individually they were soon combined in order for us to create our own mini project. The aim of the mini project was to demonstrate our new found knowledge and ability in relation to Performance Studies. In drama our theme revolved around 'The Fall of the House of Usher' by Edgar Allan Poe (1809-1849). We also studied Stanislavski's system as he was our chosen practitioner for drama. Stanislavski invented "method acting" if an actor uses Stanislavski system they would tune into a past emotion experience to represent a naturalist effect on stage. We began by reading the story, we then brain stormed ideas, picked and allocated characters. My character was a normal young girl of about 17 who was staying in a house with her friends, but was scared of being alone. I chose to be this character because I thought I could relate to her and was able to express her emotions, as I was of a similar age and same gender. I attempted to remember particular emotions I had felt when first going away without my family. I then used these feels and emotions and incorporated them into our piece. We started an improvisation, rehearsed over it and then selected the bits that worked and rejected the pieces that didn't. We chose to perform our piece in silence, we didn't want to use dialogue but rather focus on our body language, our proxemics, our relationship to other characters on stage and expression. Relationship is a key word we also use in dance; it means how each character acts with the others on stage, is they work alone or together and how they do this e.g. ...read more.

One by one people faded out and left the circle until there were just two people left, whilst doing this we also faded it down to silence. We did this piece so that we could work on rhythm and try using different beats, irregular and regular. All the skills and knowledge that I had leant from studying the three separate art forms I now brought together for my final integrated performance. The stimulus that we were given was a picture of a clock face which had a man's arm protruding from behind it. The man appeared to have a firm grip of the hour hand which was pointing towards the time 1:55. In our group we brainstormed, then continued to write down the thoughts and feelings we received from the picture. Some of the ideas we produced were power, strength and the concept of holding back time. We then came up with a storyline and characters, our basic storyline involved a young girl being hit by a truck. Everybody around at the time of the incident believed it was their fault. It was all about trying to hold back time, and "if only" it didn't happen. My character was a young child, I thought in depth about how my character would move, speak and act. This related back to the methods and theories of our drama practitioner Stanislavski who encouraged his actors to relive past emotional experiences and then incorporate them into their performances. We decided upon beginning the piece in a more abstract way, we also felt that music would work well integrated in the opening section, however we wished to later move into a more naturalistic section, as we believed that this would help convey the core message of our performance to the audience. We began our performance with a solo voice chanting tick, we gradually built up the texture and our rhythm maintained a regular and steady beat. ...read more.

link more, such as the combination of movement and sound in the opening scene and the integration of music which related to the actions of our specific characters. Our strength, I found was working together to produce the final performance, we all put in ideas and as a group we came up with the finished product. If we had more time I think our performance would have been better, I think we needed to work more on the music element and if we had practiced more on the first section I think it would have been, as a whole better, and this was our weakness. I believed that if we would have used our voices more to create music in the piece it would have flowed more, added more interest and created a darker mood. I also believe that overall it would have been a better integrated performance. I think I focused well throughout the piece and I now have a better and clearer understanding of what it takes to out together a performance. I believe that it is a lot easier when someone tells you a basic story and you continue from there, but when you have to do all the work yourself, it is a lot harder. I find that you have to spend a lot of time working and perfecting the performance and concentrating in order to get it exactly how you want it. I spoke to some of the audience prior to the performance and quizzed them on their views and opinions. Most people said it was really effective and it worked well. People seemed to like the fact that we used a dance to represent the crash. Some of the audience said that the music we used worked and went with the performance; they said that it was moving towards the end when everyone was giving their story of what they had seen. Overall I am happy with what the audience said and how they thought it worked well. ...read more.