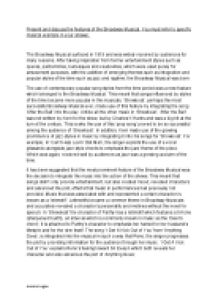 Present and discuss the features of the Broadway Musical. You must refer to specific musical example in your answer.

This meant that songs didn?t only provide entertainment, but also created mood, revealed characters and advanced the plot; effects that music in performances had previously not provided. Music that was associated with and represented a certain character is known as a ?leitmotif?. Leitmotifs became a common theme in Broadway Musicals and accurately revealed a character?s personality and motives without the need for speech. In ?Showboat? the character of Parthy has a leitmotif which features a tri-tone (sharpened fourth), an interval which is commonly known in music as the ?Devil?s chord?; it is attached to Parthy?s character to emphasis her hatred for her husband?s lifestyle and for the river itself. The song ?I Get A Kick Out of You? from ?Anything Goes?, is integrated into the musical in such a way that Reno, the singer progresses the plot by providing information for the audience through her music. ...read more.

For example; in ?I Get A Kick Out of You? in ?Anything Goes?, the pit orchestra accompanies the singing with a piano, saxophone and drum kit brushes, the latter of which provides a distinct jazzy style. In ?Porgy and Bess?, an operatic musical opened in 1935, a jazzy style is maintained throughout to represent the black community. Despite the fact that ?Bess You is my Woman Now? is accompanied by strings, lower 7ths and syncopated octave leaps are employed to maintain the jazzy style of the piece. It is clear to see that although greatly influenced by the forms of entertainment that came before it: the pantomime, burlesques and vaudevilles, it is those features that are affiliated with the Broadway Musical such as the integration of music, and the influence of popular styles of the time that made the entertainment of the Broadway Musical distinct from those that came before it. Jessica Logan ...read more.