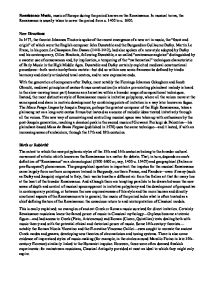 Renaissance Music, music of Europe during the period known as the Renaissance. In musical terms, the Renaissance is usually taken to cover the period from c. 1400 to c. 1600. New Directions In 1477, the theorist Johannes Tinctoris spoke of the recent emergence of a new art in music, the "fount and origin" of which were the English composer John Dunstable and the Burgundian Guillaume Dufay. Martin Le Franc, in his poem Le Champion Des Dames (1440-1442), had also spoken of a new style adopted by Dufay and his contemporary, Gilles Binchois, following Dunstable, a so-called "contenance angloise" distinguished by a sweeter use of consonances and, by implication, a tempering of the "mathematical" techniques characteristic of Early Music in the High Middle Ages. Dunstable and Dufay certainly exploited medieval constructional procedures-both wrote isorhythmic motets-but did so within new sonic frameworks defined by triadic harmony and clearly articulated tonal centres, and to new expressive ends. With the generation of composers after Dufay, most notably the Flemings Johannes Ockeghem and Jacob Obrecht, medieval principles of cantus-firmus construction (in which a pre-existing plainchant melody is heard in the slow-moving tenor part) became an alternative within a broader range of compositional techniques. ...read more.

became "gods of music". The enhanced mobility of musicians (like other artists) in this period is striking as composers and performers took advantage of trade-routes and political alliances to further their wide-ranging careers: the distinguished madrigalist Luca Marenzio was one of several composers to journey from Italy to Poland, and a number of Spanish and Portuguese composers made their home in the New World. Furthermore, the invention of music-printing by Ottaviano Petrucci around 1500, and subsequent technical developments such as the single-impression printing method developed by Pierre Attaingnant in Paris in the mid-1520s, created a cheap and effective way of disseminating music for profit: as a result, one can speak almost of a mass music industry, with the great printing-houses of Paris, Venice (Antonio Gardano and Girolamo Scotto), Antwerp (the Phal�se dynasty) and, later, London (Thomas East) increasingly creating and defining a market for their wares. Printing changed drastically the intellectual and other frontiers of the known world, not least in terms of permitting the reliable transmission of authentic texts on a scale never possible within a manuscript tradition. New Genres The impact is clear on music itself, in terms both of the emergence of the international musical language of imitative polyphony pioneered by Josquin and of the genres that defined ...read more.

The Florentines sought to reform a contrapuntal style deemed by definition incapable of expressing a text and arousing the emotions. Typically, they invoked the model of Greek tragedy to justify their new experiments. It is ironic-if characteristic of this problematic period-that so quintessentially "Renaissance" an activity as looking back to Classical antiquity should have led so directly to the destruction of the Renaissance musical style, and to the emergence of techniques that rightly or wrongly are generally defined as Baroque in scope and intent. However, if one takes into account 16th-century improvisatory styles and performance practices (solo song, ad hoc combinations of voices and instruments, unwritten virtuoso embellishment, etc.), the Florentine "new music" and operatic recitative have clear roots in the recent as well as the distant past. One might say the same of perhaps the greatest composer of his time, Claudio Monteverdi. The introit of Monteverdi's 1610 Vespers, "Deus in Adjutorium", seems fully Baroque in its sonic splendour, strong rhythms, and vibrant mixture of voices and instruments. But here, too, Renaissance techniques (not least, cantus-firmus organization) and performance practices make their effect. One lesson is that musical styles, like styles in all the arts, do not change overnight. Another is that we have yet to appreciate fully the rich complexity of the music of perhaps one of the most exciting periods in the Western art tradition. ...read more.