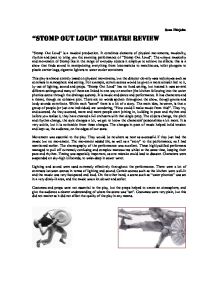 Sean Fitzjohn "STOMP OUT LOUD" THEATRE REVIEW "Stomp Out Loud" is a musical production. It combines elements of physical movements, musicality, rhythm and pace to bring you the stunning performance of "Stomp Out Loud". The unique musicality and movement of Stomp lies in the range of everyday objects it employs to achieve its effects: this is a show that finds sound in manipulating everything from broomsticks to matchboxes, toilet plungers to plastic carrier bags, cigarette lighters to water cooler containers This play is almost entirely based on physical movements, but the director cleverly uses techniques such as contrasts in atmosphere and setting. For example, certain scenes would be given a more sinister feel to it, by use of lighting, sound and props. "Stomp Out Loud" has no fixed setting, but instead it uses several different settings and many of them are linked in one way or another (the kitchen following into the water phonics scene through the drainage system). It is music and dance and performance. It has characters and a theme, though no cohesive plot. There are no words spoken throughout the show, though grunts and body sounds contribute. Within each "scene" there is a bit of a story. ...read more.

All the scenes in "Stomp Out Loud" were exceptionally good, but the four I shall be evaluating are : "The Kitchen", "Water Phonics", and "Buckets". "The Kitchen". The scene starts off in the street, and the head chef is ranting and nagging about the kids making a lot of noise downstairs. The camera zooms up on him and follows him into the kitchen, where the music begins. The head chef "controls" the rest of his crew, by giving them out tasks and he also controls the music. He decides when the music stops and continues, usually with a single clap. The rest of the cast are dressed up as chefs, with the exception of one female waiter who is taking orders. Props such as knives, plates, saucepans etc. are all used to create music. The amazing thing about this scene is that they are not making music for the sake of just making music. They are actually all performing their task while making music, for example the chef would be making music by chopping up vegetables. There were several pauses, controlled by the head chef, and there was a noticeable build up in pace and rhythm. ...read more.

The "instrument" used for this scene were buckets, hence the name. However, these buckets had small screws or metal pieces attached to the sides so that when they were hit, they would make a rattling noise. This scene required a lot of technique as the whole group had to be extremely well co-ordinated, especially the part where they slide their bucket around the circle, whilst at the same time collecting the bucket that was slid towards them. Lighting was basic in this scene, compared to others. The only forms of lighting used were the spotlights that focused on each of the cast as they performed. Towards the end of this scene, the buckets are being passed to each other with such great speed that it is mesmerising, and as they build up to such a great speed, they suddenly come to a halt. Lights fade, and it moves on to the next scene. In conclusion, I found "Stomp Out Loud" to be a highly entertaining piece of drama. It was very unique, and it is interesting to be able to watch something different now and then. The director, choreographers and not to mention the performers, all did an excellent job in producing a fine piece of drama, and I am sure that many would agree that "Stomp Out Loud" was a spectacular performance for all. ...read more.