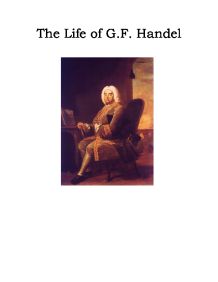 The Life of G.F. Handel

The Life of G.F. Handel George Frideric Handel was born on February 23rd, 1685 in Halle, Germany. Handel had a passion for music from the time he was capable of understanding it. His father Georg was a highly respected barber/surgeon (Cavendish, vol. 4, pg. 60), which did not believe in music as a career and wanted his son to study law. Georg thought a career in law would offer more prospects and stability (60). Handel's father was so against having his son play music, he took all of his son's instruments out of the house. However, Handel was so interested in music he managed to sneak a clavichord into the loft of the house on which he practiced secretly (60). In his early years, up until he went to college, he had not yet composed a piece; rather he simply kept learning different types of instruments to play. In the history of music, there are many different styles of music and six different time periods. Handel was in the Baroque period. Baroque can be defined as grotesque, in bad taste or of irregular and disproportionate shape (McGee 45). Meanwhile pieces during this time period were anything but grotesque-they were masterpieces. ...read more.

However, he had many other pieces, his first composition dates back to 1705 and it was called "Almira" based on the seventieth-century dramatic situation of the queen who secretly loves a commoner (Keates 24). However, his most popular oratorios were Saul, Belshazzar, and Jephtha. Saul was written in 1739, about the king's jealousy harrying of David, and the romantic interest of the hero's relationship with Saul's daughters, and his friendship with Jonathan. In Belshazzar, written in 1744, it summed up the realities of power and destiny on the one hand and the human beings who confront them on the other. Last but not least is Jephtha, written in 1751, is about the lord hiding from all mortal sight. Some of his other pieces were: Rodrigo-1706, IL trionfo del tempo e del disinganno- 1707, La Resurrezione-1708, Agrippina-1709, Rinaldo-1711, IL pastorfido-1712, Teseo-celebrates the peace of Utrecht, Te Deum, and Jubilate-1713, Water Music-1717, eleven Anthems and two dramas- Acis and Galatea-1720, Siroe and Tolomeo-1728, Lotario-1729, Partenope and Poro-1730, Ezio and Sosarme- 1731, Esther-1732, Orlando and Deborah- 1733, Athalia-1734, Ariodante and Alcina- 1735, six concertos for organ and harpsichord -1738, Saul and Israel in Egypt -1739, Deidamia-1740, Samson- based on poems of Milton- 1741, Messiah- dramatic story of Christ by the bible-1742, Semele, Belshazzar, and Hercules- 1744, Solomon and Susana 1747-1748, Theodora-1750, and Jephtha- Lord hiding from mortal sight-1751 are his more popular pieces. ...read more.

Once again the keyboard seems to be the only instrument used and is used as a solo. Movement eighteen, Rejoice Greatly O Daughter of Zion, the tempo is upbeat and fast, setting a mood of excitement or happiness, then in the later portion of the movement, the tempo slows down, in the last few seconds it picks back up and changes in range and signifies the conclusion of the movement. Skipping a few movements to movement thirty-three, Life Up Your Head, the beat itself is a bit faster, sense of excitement. It is for the most part high pitched rarely deep in sound. The music sort of reminds me of the song "Joy To The World". In the final movement, number fifty-three, Worthy Is The Lamb, the start of this portion sounds like the music played at a wedding when the bride comes walking down the isle, tempo slow, dynamics in all ranges, it also tells you without saying the conclusion of the piece is near by the way the dynamics change and at the rate in which they switch. Overall the Messiah was very soothing and I enjoyed listening to it. It helps to take your mind off of what is bothering you. I normally do not like classical music but I must say that this piece gave me interest. ...read more.