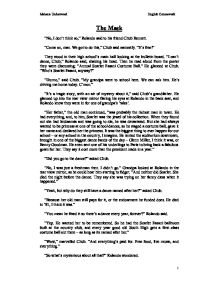 The Mask "No, I don't think so," Rolando said to his friend Chub Bennett. "Come on, man. We got to do this," Chub said earnestly. "It's free!" They stood in their high school's main hall looking at the bulletin board. "I can't dance, Chub," Rolando said, shaking his head. Then he read aloud from the poster they were discussing: "Annual Scarlet Fasani Costume Ball." He glanced at Chub. "Who's Scarlet Fasani, anyway?" "Dunno," said Chub. "My grandpa went to school here. We can ask him. He's driving me home today. C'mon." "It's a tragic story, with an air of mystery about it," said Chub's grandfather. He glanced up into the rear view mirror flaring his eyes at Rolando in the back seat, and Rolando knew they were in for one of grandpa's 'tales'. "Her father," the old man continued, "was probably the richest man in town. He had everything, and, to him, Scarlet was the jewel of his collection. When they found out she had leukaemia and was going to die, he was devastated. But she had always wanted to be princess at one of the school dances, so he staged a costume ball, gave it her name and declared her the princess. ...read more.

Your grandpa was telling the truth." "Man, that first dance was years and years ago. Hundreds of guys who went to this school have probably died since then." "It said most of those boys were seen behaving strangely at the ball." "You're just looking for excuses. Stop thinking about that stuff and think about meeting the girl of your dreams." Rolando stroked his lip silently for a moment. "What time is your grandpa going to pick us up to drive out here?" "I told him eight o'clock. Now stop worrying!" But grandpa had car trouble and didn't pick them up until half past ten. As he drove them towards the country club, Grandpa said, "Now you boys want to be careful who you're dancing with tonight. It might be Princess Fasani. Heh heh heh." Chub snorted and replied, "Who's gonna dance? I just hope there'll be some food left." "Oh, there'll be plenty of food. You've never seen the kind of spread they put out for this. Lobster, prime rib etc. You could feed an army!" When at last they made their way into the ballroom, Chub immediately took off to locate the buffet tables. ...read more.

The image of spinning around the dance floor all alone stunned his mind. Then another chilling thought struck him. 'Has Scarlet chosen me? Am I the next one to die?' A flash of white near the exit caught his eye. It was her! "Wait!" he yelled and raced to catch up with her as the redheaded apparition glided out the door. Outside in the moonlight, the white dress moved across the parking lot like a filmy, glittering cloud. The hairs on Rolando's neck bristled and he trembled with fear but continued to run after her. "Wait," he called again. She stopped and turned. The skeleton mask still covered her face. As Rolando got close to her, the headlights of a car illuminated them like a spotlight on a stage. He knew she could see his lip. "You said to join you," he blurted. "Are you..." The girl pulled off her mask and he saw her face clearly. This was no ghost. This was a real, live girl - a girl as beautiful as he had dreamed; though some might not think so. She had been born with a cleft pallet same as he had. Rolando took her gloved hand in his and smiled. "Were we made for each other or what?" Melanie Underwood English Coursework 1 1 ...read more.