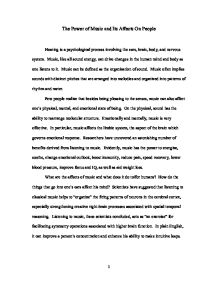 The Power of Music and Its Affects On People.

The Power of Music and Its Affects On People Hearing is a psychological process involving the ears, brain, body, and nervous system. Music, like all sound energy, can drive changes in the human mind and body as one listens to it. Music can be defined as the organization of sound. Music often implies sounds with distinct pitches that are arranged into melodies and organized into patterns of rhythm and meter. Few people realize that besides being pleasing to the senses, music can also affect one's physical, mental, and emotional state of being. On the physical, sound has the ability to rearrange molecular structure. Emotionally and mentally, music is very effective. In particular, music affects the limbic system, the aspect of the brain which governs emotional response. Researchers have uncovered an astonishing number of benefits derived from listening to music. Evidently, music has the power to energize, soothe, change emotional outlook, boost immunity, reduce pain, speed recovery, lower blood pressure, improve focus and IQ, as well as aid weight loss. ...read more.

and learning, boosting productivity, enhancing romance and sexuality, stimulating digestion, fostering endurance, enhancing unconscious receptivity to symbolism, and generating a sense of safety and well-being. Music also affects people's moods. "Music soothes the savage beast" is a very true and popular statement. Music can calm and revitalize people in ways even a lengthy nap cannot. Music holds the power to elevate one's moods above his worries and relieve debilitating depression. Music can also perk a person up if he uses it with exercise or dance. A person derives pleasure from music's meaning, whether inherent in the sound or expressed through lyrics or the symbols of performance and participation. When speaking of the pleasure of music, what is actually being referred to is the sum total of all music's pleasures and disappointments, a sort of average of the good and the bad. ...read more.

Music can be used to help people in many ways, one of these ways being medically. Music and sound are beginning to play an active role in medicine as evidenced by studies in neurobiology and psychology. In this regard, music therapy is also making a contribution to the healing arts. Because pleasurable music increases the release of endorphins, the body's natural morphine, it makes a person more tolerant of pain. Music can help one to consciously divert his attention from pain, as well as ease it. Doctors in the coronary care unit of Saint Agnes Hospital in Baltimore report that a half an hour of listening to classical music produced the same effect as ten milligrams of Valium. Whether music is affecting our mood, a system in our body, or the environment around us, it has been a big part in our society by all of its affects. There is no doubt about it. Music indeed affects humans and the way they live. 1 ...read more.