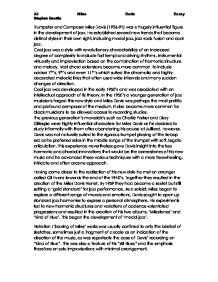 Trumpeter and Composer Miles Davis (1926-91) was a hugely influential figure in the development of jazz. He established several new trends that became distinct styles in their own right, including modal jazz, jazz-rock fusion and cool jazz.

Trumpeter and Composer Miles Davis (1926-91) was a hugely influential figure in the development of jazz. He established several new trends that became distinct styles in their own right, including modal jazz, jazz-rock fusion and cool jazz. Cool jazz was a style with revolutionary characteristics of an increased degree of complexity to include fast tempi and driving rhythms, instrumental virtuosity and improvisation based on the combination of harmonic structure and melody. Vast chord extensions became more common to include added 7th's, 9th's and even 11th's which suited the chromatic and highly decorated melodic lines that often used wide intervals and many sudden changes of direction. Cool jazz was developed in the early 1950's and was associated with an intellectual approach of its theory. In the 1950's a younger generation of jazz musicians forged this new style and Miles Davis was perhaps the most prolific and profound composer of the medium. It also became more common for black musicians to be allowed access to recording studios. The previous generation's maverick's such as Charlie Parker and Dizzy Gillespie were highly influential characters for Miles Davis as he decided to study informally with them after abandoning his course at Juilliard. ...read more.

The head-solos-head format used here is distinctive of small modern jazz groups. Miles successfully obscures the original pulse, metre and harmonic rhythm with changing phrase lengths, syncopation and persistently contrasting accents. The rhythm section during this era, as usual, carried the weight of harmony and rhythm. Drum patterns were highly complex with polyrhythmic styles and an ability to maintain a quaver beat on hi-hat, with bass and snare accents. In "Move", drummer Max Roach, already well known for his almost 'melodic' drum solos, concentrates mainly on snare drum and tom-toms but uses cymbal splashes at the ends of phrases as a link. Still common were the walking bass lines, off beat quaver movement and uncluttered swing time styles. Pianist 'Bill Evans' was well accustomed to using an increased chord vocabulary focusing on punctuation to highlight changes which then developed into more complex polychords. Revolutionary changes were also made to the melodic styles and structures. As improvisation was frequent, individual proficiency was crucial. At the turn of the century, harmonies were enriched through the successive inclusion of higher members of the overtone series, resulting in the extensive use of ninth, eleventh and thirteenth chords and beyond. Cool jazz then prevailed with the use of higher harmonics creating an even more dissonant effect. ...read more.

The ambiguous front line of the Miles Davis Nonet (tuba, baritone sax and French horn) made song arranging rather challenging for piano player John Lewis but the unconventional mix of the different instrument styles gives a light airy sound to the prominent contrapuntal textures of "Move" and the overall ensemble works well. "All Blues" in contrast to the other jazz works mentioned is an extended performance of some 11minutes. Written 10 years after "Move", it saw the advent of the 12-inch LP record which offered 20mins of playing time per side. Jazz improvisers could then perform in the studio as they would in a live performance, enabling them to develop their ideas further than previously and multiple microphone placement permitted ensembles to be 'balanced' in the studio. It is evident that at the end of the 1940's Miles Davis was beginning to create a new form of jazz music and his expansive ideas are clearly expressed in "Move" and by 1959 he had sourced a ground-breaking transformation for the world of music with "All Blues" and "So What" which resulted in the creation of a sophisticated and very different new style. Miles Davis continues to be one of the most prolific and profound composers of jazz music. ?? ?? ?? ?? A2 Miles Davis Essay Stephen Beattie ...read more.