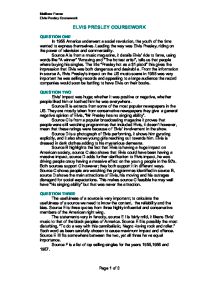 What was the social impact of Elvis Presley?

ELVIS PRESLEY COURSEWORK QUESTION ONE In 1955 America underwent a social revolution, the youth of the time wanted to express themselves. Leading the way was Elvis Presley, riding on the power of television and commerciality. Source A is from a music magazine, it details Elvis' ride to fame, using words like "A winner" "Amazing and "The hottest artist", tells us that people where buying his singles. The title "Presley hot as a $1 pistol" this gives the impression that Elvis was both dangerous and desirable. From the information in source A, Elvis Presley's impact on the US music scene in 1955 was very important he was selling records and appealing to a large audience the record companies would soon be battling to have Elvis on their books. QUESTION TWO Elvis' impact was huge; whether it was positive or negative, whether people liked him or loathed him he was everywhere. Source B is extracts from some of the most popular newspapers in the US. They are mostly taken from conservative newspapers they give a general negative opinion of Elvis, "Mr Presley has no singing ability". Source C is from a popular broadcasting magazine it proves that people were still watching programmes that included Elvis, it doesn't however, mean that these ratings were because of Elvis' involvement in the show. ...read more.

The reliability of this source is good as they are onions we assume that they are as intend by the author. This source is, however, extremely biased; all the opinions are from a similar group of people. In conclusion this source is moderate useful when determining Elvis' impact. Source F's content is factual information plotting the rise of Elvis' chart sales. Its reliability is superb as they are undoctored facts, there is some bias as the years selected where the years when Elvis was selling records, it doesn't show the years prior to 1955 or after 1957. This source is extremely useful; from this source we can learn just how big an impact Elvis had on the music industry, however as the social impact is not discussed it is not as valuable when discussing the social impact. Source F is the most useful source when looking at the impact caused by Elvis. QUESTION FOUR By 1958 attitudes to Elvis where beginning to change, one of the reasons this change occurred was because of Elvis joining the army, this provided him a with a grounding that many of his opponents reason t respect him and realise his achievements, this combined with the fact that people were getting used to Elvis lead to opposition fading. ...read more.

One of the most popular shows was the Ed Sullivan show. Millions tuned in to watch; there was something for everyone. I didn't take long for Elvis to realise this was the place to be; he made several appearances on the show to terrific acclaim. During Elvis' career he appeared in several films, it should be noted that Elvis was by know means a terrific television personality, more like a famous footballer who requires constant prompting and guidance, the main reason for Elvis' success on the screen was the fact eh was Elvis, people weren't coming to see Elvis act, they were coming to see Elvis. To the teenagers of the time Elvis was a god, bored of following in the steps of there parents they began to carve out identities for themselves, the invention of the "Greaser" and the "Preppie" occurred at this time. They were all united by one common cause, a need to strike back they began to slick back their hair and listen to Elvis. Elvis created the teenager with his music; it provided an outlet for the troubled teens. Elvis' success is mainly attributed to his music and performances but without the use of television the southern states would never have had to share him and he would never had reached the audiences he did. ?? ?? ?? ?? Matthew Farren Elvis Presley Coursework Page 1 of 3 ...read more.