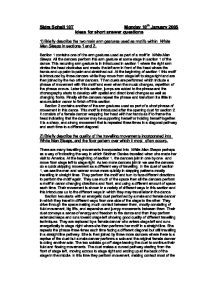 Sidra Sohail 10T Monday 10th January 2005 Ideas for short answer questions 1) Briefly describe the two main arm gestures used as motifs within White Man Sleeps in sections 1 and 2. Section 1 contains one of the arm gestures used as part of a motif in White Man Sleeps. All the dancers perform this arm gesture at some stage in section 1 of the dance. This recurring arm gesture is in introduced in section 1 where the right arm circles the head clockwise and meets the left arm in front of the head where the hands end up palm to palm and stretched out. At the beginning of section 1 this motif is introduced by three dancers while they move from stage left to stage right and are then joined by the two other dancers. Then duets are performed which include a phrase of movement with this motif and even when the music changes, repetition of the phrase occurs. ...read more.

They use much of the space then all the dancers perform a motif in canon changing directions and front, and using a different amount of space each time. Their movement is shown in a variety of different ways in this section and this introduces us to the different ways in which they may travel later in the dance. Section two starts with an energetic duet performed by a male and female dancer in which they travel in different ways from one side of the stage to the other. They drive through the space making much contact between them, mostly consisting of fluid movement, big lifts, and expansive and jumpy movements between them. Their duet conveys a sense of energy and freedom to the dance and then they perform extended leaps and runs toward stage left showing good quality of different travelling techniques. They are replaced by a female dancer who enters stage left and runs energetically to stage right where she then performs her motif in a straight line. ...read more.

The section is complete when the female dancer goes off stage left leaving the male dancer on stage at the bottom of stage left. 3) White Man Sleeps was choreographed in 1988 as a response to a journey which the choreographer Siobhan Davies made through the U.S.A. The dance is made up of 5 sections, to music composed by Kevin Volas, and played by a string quartet. There are 5 dancers; 3 male and 2 female. The dancers wear costumes designed by David Buckland. The set for the dance consists of woven floor cloth on the ground, and images of the musicians projected onto a backdrop. The set designed by David Buckland, represents America and the space in which Davies travelled throughout her visit around the country. The premiere performance of White Man Sleeps was at the Riverside Studios in London, performed by the Siobhan Davies Company (later named Siobhan Davies Dance Company). The dance was broadcast in 1989 and was directed and televised by Peter Mumford who was also responsible for the lighting design. ...read more.