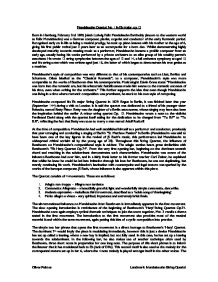 Mendelssohn Quartet No 1 in Eb major, op.12 Born in Hamburg, February 3rd 1809, Jakob Ludwig Felix Mendelssohn Bartholdy (known to the western world as Felix Mendelssohn) was a German composer, pianist, organist and conductor of the early Romantic period. Recognised early on in life as being a musical prodigy, he took up piano lessons with his mother at the age of 6, giving his first public recital just 3 years later as an accompanist for a horn duo. Whilst demonstrating highly developed maturity towards creating music as a performer, Mendelssohn became a prolific composer from an early age, usually having his works performed by a private orchestra to an elite group of his wealthy parent's associates. He wrote 12 string symphonies between the ages of 12 and 14, a full orchestra symphony at aged 15 and his string octet which was written aged just 16, the latter of which began to demonstrate his true genius as a musician. Mendelssohn's style of composition was very different to that of his contemporaries such as Liszt, Berlioz and Schumann. Often labelled as the "Classical Romantic", as a composer, Mendelssohn's style was more comparable to the works of Beethoven than his contemporaries. Musicologist Edwin Evans states "Mendelssohn was born into the romantic era, but his aristocratic fastidiousness made him averse to the romantic excesses of his time, even when writing for the orchestra." ...read more.

In this case, he has set up a leaning towards the subdominant. In the following bar, he also makes use of another technique often used by Beethoven, three short notes in preparation for one long note. The purpose of this short phrase is to inform the listener that it has modulated back to Eb (lack of Db's). This second motif is also used as the melody for the contrapuntal texture set up in bar 6, where the 4 note melody is played amongst itself in the other voices. The opening 17 bars of this piece not only make up the introduction, but also map out most of the melodic devices that Mendelssohn will use throughout the piece. In addition to subdominant leanings, suspensions and appoggiaturas provide a sense of unease and increasing tension, as well as one of the pathways through which composers are able to explore different keys. The final main feature of the introduction is this idea of melody dominated homophony, where the lead voice assumes a melody, whilst the other voices accompany it with chordal support. "Allegro non tardante" (Bar 18) marks the official start to this piece (with regards to sonata form). This is therefore the exposition, presenting itself in a quite predictable key of the tonic, Eb major. ...read more.

It is here we soon find a coda, where new material is added and the key of F minor is brought back. After 12 bars of chromatic modulation, the haunting melody that was heard earlier makes another appearance, however this time it does not move to G minor, or A minor, instead moves straight back to Eb. The main them is sequenced here, leading up to the ending of the piece. The final few bars feel relatively restrained, and the pianissimo marking leaves the listener with a peaceful ending to the piece. It is easy to see the huge impact Beethoven and Bach had on Mendelssohn's life, with compositional devices from both of them used extensively by Mendelssohn throughout his compositions. His style of composition was much more restrained than others at his time, and some would argue subsequently much more refined, due to his refusal to "step out of the box". Whereas composers like Schumann were exploring the extent to which they could take their music, Mendelssohn was happy to compose in a more mannered style, sticking so the classical guidelines, but managing to rise above the somewhat orthodox approach that seemed to govern the composition of classical music. Mendelssohn had supreme grasp of lyricism, he excelled in understatement and was able to provide colouristic orchestrations that provided his works with an undeniable freshness and brilliance. ?? ?? ?? ?? Oliver Palmer Landmark: Mendelssohn String Quartet ...read more.