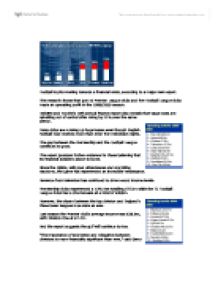 The report shows that only Aston Villa and West Ham achieved above average sporting performance with below average wages. It makes soothing news for Villa chairman Doug Ellis, the subject of fan protests earlier this season. On that note, the report states: "The truth is that fans' expectations are high but clubs must manage their business to the best of their ability - and their fans' expectations." Statistically speaking, it would appear transfer spending doesn't guarantee success Deloitte and Touche A similar comparison of transfer spending and league position is less comforting for big spenders. Liverpool, who have spent �58.5m, and Newcastle, who have spent �58.2m, have been the biggest net transfer spenders in the five-year period examined by the Deloitte report. And comparing transfer expenditure with average league position for 1996/96 to 1999/2000, the report states: "Statistically speaking, it would appear transfer spending doesn't guarantee success." Arsenal are the most impressive club in bucking the trend, attaining an average league position of just less than second with an average transfer expenditure of �5m. At the other end of the scale, Newcastle (again) have got poor value for money, spending an average of �11.6m per year but achieving an average league position of seventh. Newcastle's spending has not been rewarded Having shown that wages bear a closer correlation to success than transfer spending, Deloitte and Touche point out that: "Consider the fact that expenditure on players is shifting to wages as opposed to transfers - and the transfer market changes will exacerbate that effect - and it looks likely that the Premiership may become further polarised in future years." ...read more.

Average players, and that's the majority, will no longer get the money good players have been getting. Players probably won't believe it until they see people they know ending up out of work.' Clubs will offer 'take-it-or leave-it' contracts, especially to older players. Shorter contracts, often for two years instead of three or four, will also become commonplace. Nick Blackburn, acting chairman of Queens Park Rangers, said: 'Lower wages, shorter contracts and smaller squads will definitely happen at clubs across the board. Clubs will do whatever cost-cutting is needed to keep themselves alive. 'Any new players coming to QPR this summer might be surprised at the level of salary we are able to offer. This is financial reality finally dawning. We're lucky that the ITV money is only eight per cent of our income. For others it's much higher.' Many chairmen of First Division clubs are keen to amend the standard player's contract to allow them to pay players less if the team are relegated. The PFA would resist any such move.The League, conducting an inquiry into the future of their competitions and financing, will report to clubs on 18 April. They hope to unveil a wide range of proposals which will guarantee the survival of all 72 teams in their three divisions. http://www.observer.co.uk/sport/issues/story/0,11839,676892,00.html It seems that clubs in the lower leagues, more perhaps than their Premiership 'cousins', need to remember that transfer fees are paid out once, but wages are a liability throughout the period of a player's contract - irrespective of that player's performance on the football park. Football is a labour intensive business, so wages form a higher proportion of turnover than in most other industries. Whilst football clubs clearly have other overheads to finance, none of these are likely to rival players' wages, in scale. http://www.bized.ac.uk/stafsup/options/argument/arg7-5.htm ...read more.