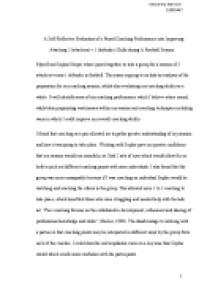 A Self-Reflective Evaluation of a Paired Coaching Performance into Improving Attacking 2 (attackers) v 1 (defender) Skills during A Football Session.

﻿Kimberley Marriott 10005447 A Self-Reflective Evaluation of a Paired Coaching Performance into Improving Attacking 2 (attackers) v 1 (defender) Skills during A Football Session. Myself and Sophie Harper where paired together to take a group for a session of 2 attackers versus 1 defender in football. This essay is going to include an analysis of the preparation for my coaching session, whilst also evaluating my coaching ability as a whole. It will identify areas of my coaching performance which I believe where sound, whilst also pinpointing weaknesses within my session and coaching techniques including ways in which I could improve my overall coaching ability. I found that coaching as a pair allowed me to gather greater understanding of my session and how it was going to take place. Working with Sophie gave me greater confidence that our session would run smoothly, as I had 2 sets of eyes which would allow for us both to pick out different coaching points with more individuals. ...read more.

Jones, Wells, Peters and Johnson (1982) state that ?Skill level will vary widely within a group. Players do not come to practice with the same degrees of skill. Some will have never played before, while others will have a high level of skills specific to the activity.? During this activity, the girls started to move around outside of the given area; at this point I stopped the session, re-identified the boundaries and started them again. This was to ensure they were working hard in a ?small? space whilst also being in a safe zone of the court. The second task we introduced was a lunge. I feel I introduced the task well explaining why the lunge is effective in beating a defender; however my peers criticized my demonstration as I did not face them when talking and they found it difficult to hear what I was saying even with good voice projection. To improve my demonstration next time I would face my peers and speak clearly with-out turning my back until I had finished talking. ...read more.

Again I found myself facing the wrong way during my demonstration; however I did ask frequent question to check understanding. My peers thought that this was helpful as they had the opportunity to ask questions if they were unsure. To conclude, I feel that on the whole our session went smoothly and that the group achieved greater knowledge and skill on how to beat a defender. I feel that as coaches we got amongst the group and ensured coaching points where made to help and enhance individual?s skills. Previously I have discussed what I would change in future, and I believe that this would introduce greater progression into my session and greater opportunities for all to take part and have a more ?hands on? session. I would give out more praise because Bandura (1989) suggests that if an individual believes in themselves then the effort they put into a task will increase, which can only improve the participants skill and motivation levels. Most of all I would ensure that my demonstrations were carried out in a way that all the group could see and hear clearly what their task would be to minimize confusion and maximise outcome. ...read more.