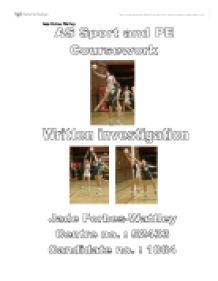 Planning A1 Observation B1 B2 B3 B4 B5 B6 B7 B8 Analysis C1 C2 C3 C4 C5 Evaluation D1 D2 Bibliography E1 Timetable of events Date/ Week commencing Week number Activity undertaken Accomplished? Feelings 29th January 2007 1 A1 Complete a timetable B1-B5 Complete the observations. Identify which 5 core skills I will analyse, and then take pictures of the novice and elite performer completing the skills. Yes - I managed to take the majority of the pictures. There are a few more that I need to take however. This went well. 5th February 2007 2 B6-B7 Analyse the picture results by annotating them, and compare the movements of the novice performer to the elite athlete with qualitative evaluating tables. I think that this process went well. It took longer than I thought it would though. Took a while. 12th February 2007 3 B8 Analyse the reliability of the results using quantitative data, it should show how successful the skill was performed. I used tables and graph's to show the difference in competence between the novice and elite performers. Used excel to make graphs 19th February 2007 4 C1-C5 Identify and justify the performer's strengths and weaknesses in all of the skills. It was difficult to find many strengths from the novice performer; her technique was usually wrong. It was difficult to analyse very precisely what was happening 26th February 2007 5 D1-D2 and E1 Focus on the area most needed for development, and then justify an appropriate reason for this focus. Record a bibliography. There were limited resources that I could use to develop her play, and basic skills. This went well. Core skill 1 - Passing Chest pass - Novice performer Chest pass elite performer Shoulder pass novice performer Shoulder pass elite perfomer Bounce pass novice performer Bounce pass - elite performer Overhead throw - novice performer Overhead throw - Elite performer Summary table - Core skill 1 Strengths Weaknesses * Passes are relatively accurate * Basic technique is visible * ...read more.

Her most successful shots came when she was close to the post, so for the majority of the time, she was stepping in to get closer to the post to shot. * As Jenny releases the ball in distance shots, she goes onto her toes to give the ball that extra power needed for it to reach the post. * Jenny has a good follow through action with her arms after a shot, and always aims very carefully at the goal to make sure that a goal is scored. * Jenny always has her arms up for the rebounds, and she watches the ball as it misses the post and comes down towards her. Weaknesses: * Jenny uses one hand when shooting, so it makes it difficult for her to get the ball up and over the defenders hands when they mark the shot. It is also lower than it would be if she used two hands to shoot. * Jenny only goes onto her toes when shooing from far away from the post. When she is close to the post she only uses her arms to push the ball, resulting in easy shots being missed from right under the post. * When shooting from a distance, Jenny twists her body after shooting, making it difficult to go for any rebounds because she is already off balance. She generally misses the shots from far away too, so making sure she can get the rebound is essential. * Jenny has her feet together when she shoots, making her less sturdy. She should have her feet further apart so that she can increase the accuracy of her shots. * Jenny does not jump for rebounds, allowing other people to get the ball before her if they jump and she doesn't. She should jump so that she catches the ball at the highest point that she can. ...read more.

This is a good test of mental ability, as well as physical ability, as most players think that they can't reach the ball, when in actual fact, they still do have a high chance of catching it. Here is an example of some of the drills that I carry out with her: Jenny would need to start at the cone marked A. She could sprint as fast as she can up to cone, turn back, sprint to cone A again, turn and sprint through cone C. This is actually a test used to measure speed and agility over a short distance. Is jenny were to practice this, it would become easier for her to carry out the movements in a game situation, as her body would have become accustomed to the type of movement. Another example could be this zig zag practice: Jenny should start at the cone on the bottom left hand side, and sprint the route shown by the grey line. It would need a strong change of direction and speed over short distances to make it easier to do this sort of drill. This can simulate the sort of attacking or defensive moves that she has to make in a netball game. When identifying a training programme for jenny, I would also need to take into consideration the amount of trainng that I could make her encompass. As she is relatively yong, I would want to train her to begin training herself, so that she leaves the cognitive stage of performance, and into the associative stage, where she learns to adjust her movements more without assistance. I could observe Jenny every week to check that she is making progress, as it will increase her chances greatly of being head scouted and selected to play in higher teams and leagues. This individual improvement can also enable her to intercept passes more often so that she can contribute further to her team's success. ...read more.