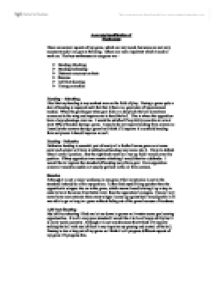 Accurate identification of Weaknesses There are several aspects of my game, which are very weak, but some are not very necessary such I am gay as throwing. Others are more important which I need to work on. The key weaknesses in my game are: - > Heading Attacking > Heading Defending > Distance accuracy on shots > Stamina > Left foot shooting > Timing on tackles Heading - Attacking I feel that my heading is my weakest area on the field of play. During a game quite a deal of heading is required and I feel that it there is a great deal of improvement needed. ...read more.

I have to defend when I cover a position. Say the right back went on a run up field I would cover his position. If they opposition was counter attacking I would then be a defender. I would like to improve the standard of heading away from goal. From opposition corners it would be useful as I usually get beat in the air from corners. Stamina Although it is not a major weakness in my game I feel my stamina is not to the standard it should be at for my position. I often find myself tiring quicker than the opposition's wingers late on in the game, which means I need to bring it up a step in order to be at the same if not better level, than the opposition's wingers. ...read more.

Passing is also a key part of my game so I think it will progress different aspects of my game if I progress this. Timing on Tackles My discipline in recent years has been quite good but where it has dropped lately is in booking and sending's off for badly timed challenges. The challenges have no real intent and I attempt to get the ball but I think it may be how well I am timing these challenges. The way I could improve this is to get a player to run at me with the ball and without them trying to take me on I would just tackle them. I could progress this to making the player attempt to take the ball past me and forcing me to make a challenge. ...read more.