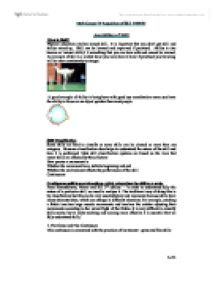 Acquisition of Skill What is Skill? Physical education evolves around skill. It is important that you don't get skill and ability mixed up. Skill can be learned and improved if practised. Ability is also known as 'natural ability' it something that you are born with and cannot be learned. An example of skill is a cricket bowl you learn how to bowl if practised your bowling will be more consistently on target. A good example of ability is being born with good eye coordination mean you have the ability to focus on an object quicker than most people. Skill Classification Some skills are hard to classify as some skills can be classed as more than one category. However classification does helps to understand the nature of the skill and how it is performed. Most skill classification systems are based on the view that motor skills are affected by three factors: How precise a movement is Whether the movement has a definite beginning and end Whether the environment affects the performance of the skill Continuums Continuums split is several sections, which categorises the skill on a scale. From Honeybourne, Moore and Hill 2nd edition: - 'in order to understand fully the nature of a particular skill, we need to analyse it. The traditional way of doing this is by classification but this can be very unsatisfactory and inaccurate because skills have many characteristics, which can change in different situations. ...read more.

Discrete skills are brief, well-defined actions, which have a clear beginning and end. They are single, specific skills, which make up the actions involved in a variety of sports such as hitting and throwing. A good example of a discrete skill is throwing a dart, a football pass and a table tennis serve. Serial Skills are a group of discrete skills strung together to make a new and complex movement. A good example is the sequence of skills for the triple jump, a cricket bowl and tennis serve. Continuous skills have no obvious beginning or end. The end of one cycle of movements is the beginning of the next, and the skill is repeated like a cycle. These skills could be stopped at any moment during the performance of the skill. Examples of continuous skills are Swimming, Running, Cycling and basketball dribble. 5. Individual, Coactive and Interactive skills Individual skills are those performed in isolation. There is no participation of other people in the sport. Coactive skills are those performed at the same time as others but without direct confrontation. Interactive skills are those performed where other performers are directly involved. Self and Externally paced skills Self-paced skills are those that are instigated by the performer and externally paced skills are those where the timing of the performance of the skill is not controlled by the performer, but by an outside instigator. ...read more.

These process and abilities can be broken down into sub-routines. Example - Tennis Smash 1. Grip racket handle firmly with your preferred hand 2. Move your feet until they are about one foot apart 3. Turn sideways so that your preferred hand is behind you 4. Take racket back 5. Get into back scratch position. 6. Bring racket over your head 7. Hit the ball 8. Follow through These can be applied to any skill although it is more suited to other skills better than others e.g. a gross skill such a cricket bowl. There is an alternative to subroutines, which are the whole method, part method and progressive part method. Using the whole method the skill is taught without breaking it down into subroutines. The player can experience the feel of the whole skill and can execute the skill and appreciate the components of the movement and how they interact. The part method involves splitting the skill in a sub-routine or Fundamental Movement Pattern, which is useful for an inexperienced performer. As well for low ability performers or dangerous, complex, new or unfamiliar skills. It can improve the morale of the performer as he or she can feel success. It can help to understand the mechanics of the techniques involved in the skill especially serial skills. Progressive part method is either part method or whole method. The skill is broken down into sub routines that are like links in a chain then these links are than chained or joined together. Mark Cooper 3P Acquisition of Skill 30/04/07 1 of 5 ...read more.