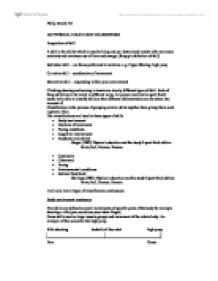 - internal and external paced skills Self-paced skills- the performer controls the rate at which the skill is executed. These skills are usually closed skills, for example javelin throw, discus Externally paced skills - are the surroundings. These surroundings could include opponents, controls the rate of performing the skill. The performer must pay attention to external events in order to control his or her rate of movement. These skills involve reaction, and are usually open skills, for example in ball games the performer must time his actions with the actions of other players and the ball. For example, taking a corner in football, the players in the box would need to time their runs perfectly to connect to the ball with their head and score the goal. Self-Paced Externally paced Discus Heading a ball(football) Individual coactive Interactive Self Paced Discus throw Serving (tennis) Corner kick (football) Externally Paced Dodging a punch (boxing) Receiving a serve (tennis) Penalty save (football) The organization continuum This table puts into category which skills need a high organization or a low organization. High organized skills are skills that need planning for example tactics in a football match; this is so everyone knows what they need to do. ...read more.

I would explain the basic principles of the forehand drive for example the shifting of weight as you swing the racket to give optimum force on the ball. To keep a high level of intrinsic and extrinsic motivation I would play games to improve his technique, this should keep him interested. The interactive skill I would use is a pass in football. Now I would expect the novice to have sum prelimory experience of kicking a football as this is the most popular sport in the world. I would give him target to hit and maybe I would pose as a moving target for him to predict my moment and pass the ball in front of me. This is the most difficult passing skill along the floor. For intrinsic and extrinsic motivation I would let him take penalties against me for fun or f there was a group of people I would have a game and see if they will apply what they have learned in the game. Conclusion For any training technique to work you need to remember the following table. I hope that in my report I have proven that classification helps you to break down training skills and help to determine what techniques you need to improve them. ...read more.