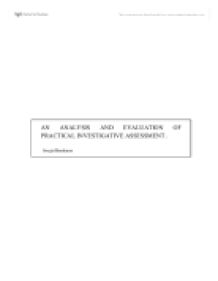 An analysis and evaluation of pratical investigative assessment.

AN ANALYSIS AND EVALUATION OF PRACTICAL INVESTIGATIVE ASSESSMENT. Sreeja Bhaskaran Introduction What you test is what you get. In the quest for accountability using the tool of assessment inevitably results in a tailoring of teaching to the required assessment. The pressure is on to teach the skills that can be counted and reported, but just how useful are these skills? Assessment in school science as with other subjects can take many forms from oral questioning to the marking of exercises set for homework or short written tests of knowledge. Most often we think of assessment in the context of public examinations such as the GCSE and the A-Level. Much of the media attention and political commentary places enormous faith in the ability of examination systems to give absolute answers. Indeed educationalists have identified government policy as that of an "empty commitment" (Black and William page5, 1998). Whilst the TGAT have publicly emphasised the importance of formative assessment the reality is that resources and political policy is clearly focused on the external testing of teachers and schools. Undoubtedly the national curriculum has increased the amount of testing. In the UK students are compulsorily examined at four points during their school career at ages 7, 11, 14 and 16. Summative assessment does have a role in so much that it can provide information for parents and employers that can indicate the overall achievement of pupils over a period of time. However it does not help the teacher of a pupil identify areas of difficulty early enough to correct them. The end of a topic test does not leave room to help the failed child to learn better. If the majority of assessment is seen to consist of testing low level skills and fact based knowledge, this is the diminishing of education to training students to perform certain prescribed behaviours, emphasis on outcomes rather than processes, encouraging the passive nature of learning and elevating the trivial observable short term behaviours over enriching, high order, creative, open ended, lifelong aspects of education. ...read more.

By doing this I was enabling the pupils to focus on the nature of the task and start to pinpoint the key variables involved. It also got the problem into a form that could be investigated and led to discussions of the practicalities of solving the problem. Having perceived the problem and reformulated it through identification of variables, to give further guidance with planning I provided a support sheet devised by the department which contained an array of questions. Frost (page 71, 1995) identifies such questions as supporting students in undertaking the thinking and decision-making processes for themselves (appendix 8). I was also able to use the sheets as formative tools to give feedback to the less able students, by collecting these planning sheets and adding comments and further questions to stimulate their thought on their planned procedure (appendix 9). Another reason for relatively high achievement in this skill area is that it may well be a skill that they had been able to exercise during previous practical activities. Obtaining evidence was another skill area, which faired relatively well with only two pupils failing to be awarded any marks due to absence and incompletion of reports. Using apparatus, making measurements and observations are all basic practical skills that Parkinson (1994) rightly comments would have developed through pupil's prior practical exercises. All pupils were able to make appropriate observations and the majority met the needs for accurate results through systematic and repeated measurements (appendix 10). This was also the point where pupils had the opportunity to do a "trial run" and be able to modify their techniques and strategies appropriately. My own strategy at this point was to create a balance between encouraging pupil to work independently and also giving constructive feedback about apparatus, materials and strategies that pupils adopted. I deliberately tried not to make the procedural demands to complex due to the classes relative inexperience and timing factors. ...read more.

Practical assessment of this kind is designed to elicit critical thinking, problem solving and communication skills which serve to prepare students for more competitive high performance work places which demand individuals have and be able to use such skills. The teaching and assessment of scientific investigation is not a simple task, particularly when you are relatively inexperienced. Investigative work differs in a number of ways from other types of practical work. For example investigative work gives pupils the opportunity to test their own understanding of scientific phenomena, encourages pupils to make statements that they can test, allows them to plan their own investigations, gives opportunity for discussing ideas with other pupils, it in reality encompasses a whole range of activities that are centered around helping pupils to learn. The role teachers take in these investigations must be as Frost (1995) suggests "compliment and support" the role of students. The teacher's skill lies in their ability to enable students to undertake the thinking and decision making for themselves. It is all too easy for prior practical experience to take over and tell students what to do. I felt I managed to achieve the optimal balance when pupils were initially planning and implementing their investigations without explicitly dictating and telling the pupils what to do. The suitability of this approach was validated by the fact that pupils achieved relatively high marks in these skill areas (appendix 5). However when it came to analysing and evaluating evidence I could see I gave insufficient guidance due to time constraints and also a concern to ensure students think independently. I may well adapt the framework for structuring lessons recommended by the Open Work in Science Project (1992). The framework consists of five distinct stages focusing, exploratory, reporting, consolidation and application and discuss utilising different techniques of formative feedback. Furthermore I would need to give more thought into context and objectives that I want to achieve through having completed an investigation. It would be useful in the future to adopt a teacher-planning sheet for investigative work as suggested by Parkinson (page 125 1994). ...read more.