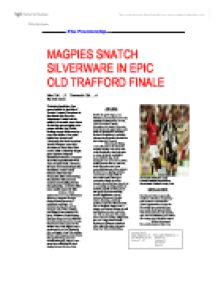 An article on the Premiership - Magpies s****h Silverware In Epic Old Trafford Finale.

MAGPIES s****h SILVERWARE IN EPIC OLD TRAFFORD FINALE Man Utd.....3 Newcastle Utd.....4 By Josh Jones Yesterday lunchtime, four teams battled for the title of Premier League Champions in the closest race for years. Manchester United and the unlikely Newcastle were drawn for the top spot on eighty-nine points with the Red Devils leading on goal difference by a mere four strikes. One point behind sat Arsenal and Liverpool, also level on points. Arsene Wengers men were favourites to steal Man Utd's crown, with a relatively simple game against relegated Sunderland whereas Liverpool faced the unpredictable West Ham at Upton Park. However, all eyes were focused upon the absolutely crucial match between Man Utd and Newcastle, bitter rivals during the nineties with common neck-to-neck battling for the championship. A win for either team would ensure the title. As three o'clock approached on a sunny Manchester afternoon, Magpies' manager Bobby Robson presented a traditional attacking 4-4-2 formation putting forward his strongest team. With a striking partnership of Alan Shearer and pacey Welshman Craig Bellamy, they have proved to be a nightmare for defences all around the country. ...read more.

The referee pointed to the penalty spot and Van Nistlerooy sent Given the wrong way to level the scores. Before the interval, Newcastle pressured Man Utd, Continued from Page 79 with Solano hitting the underside of the crossbar after a stunning run. In a dramatic change of fortune the ball bounced out to Beckham in plenty of space. United countered swiftly and an inch-perfect cross from Giggs allowed Roy Keane to head the ball past the outstretched Given, on the blow of the half-time whistle. The atmosphere in the stadium was immense, the numerically superior Manchester fans applauding their team. The second-half spawned another four goals as both teams headed for glory. The unchanged Newcastle side were quick to get back into the game, netting in the 49th minute. The opportunity sprung from another Dyer through ball, this time finding Bellamy. Laurent Blanc's excellent defending to push the Welshman wide wasn't enough as he slotted home from a tight angle, catching Barthez in the wrong position. DOMINANCE The Newcastle side, clearly influenced by the team-talk, continued to pressurise Sir Alex Ferguson's Champions, forcing a string of excellent saves from Barthez. ...read more.

The goal came exactly upon the ninetieth minute, setting up an exceptionally tense finish for Newcastle. Nothing happened during the two minutes of stoppage time and the whistle blew before a dominant eruption of delight from the West-end of the stadium. Newcastle had claimed their first piece of silverware since 1955. CHAMPIONS Alan Shearer led the team up to the podium to collect the FA Barclaycard Premiership Trophy from Charles who produced a wry smile. The three-year Newcastle captain lifted the cup high to another deafening roar. Kieron Dyer was appropriately named Man of the Match and Givens excellent save minutes from time was punched upon the main screen repetitively. Eventually, the Magpies unpredictable route to the Premier League had been rewarding. It all started in 1990, when they were struggling in the second division. They were taken over by Kevin Keegan, remarkably transforming the team into a very able force. Keegans efforts however, were not rewarded as Manchester United constantly snatched the cup away. Keegan quit in 1998, after a dispute with bosses, and after unsuccessful reigns of Kenny Daglish and Ruud Gullit, Bobby Robson arrived. Despite his sixty-nine years of age, Robson again changed Newcastle into a very capable team. His effort providing Newcastle the FA Barclaycard Trophy. ...read more.