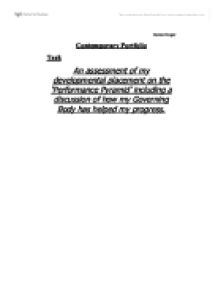 An assessment of my developmental placement on the 'Performance Pyramid' including a discussion of how my Governing Body has helped my progress.

Darren Cooper Contemporary Portfolio Task An assessment of my developmental placement on the 'Performance Pyramid' including a discussion of how my Governing Body has helped my progress. The performance pyramid is split up into 4 sections these are:- * Foundation * Participation * Performance * Excellence Foundation is - The initial first exposure for usually a child in a particular sport. This is also play; this can be just in the garden kick a ball against a wall or fence. Participation is - Playing regularly at a recreational level, but this is not being committed to a team. Performance is - Playing regularly for a team being committed to training. This is also playing to represent yourself and your team and this stage is also has a competitive edge to it. Excellence is - Earning national honours for playing for your country, for football it means the athlete being professional and also an athlete will have a high profile and most probably will be earning high wages each week. ...read more.

I got support from my parents both financially and from the fact that they took my to matches and training. My uncle always played football with me on the street and he always took me to Feniscowles playing fields whenever he had chance. This is the performance pyramid for sport in Australia. This I feel is easier to progress from the FOUNDATION level of the performance pyramid to excellence than it is for the English version. This is because the English version has 4 basic blocks above each other; this makes it hard to progress through each band to achieve excellence. The Australian pyramid is shaped like this (below) so it is easier for athletes to progress and even skip a band. The Australian pyramid has its stages next to each other not on top of each other therefore leaving progression open for many people. In conclusion my governing body has obstructed my progress through the performance pyramid. I think that if the Australian performance pyramid were being used in this country I would have had an increased chance of achieving excellence. ...read more.