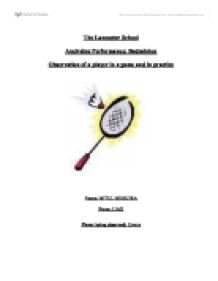 Analysing Performance: Badminton Observation of a player in a game and in practice

Concentration: Concentration can affect a player because a in a sort like badminton a player may be required to keep his eye on the shuttle so that he knows where to go and how to perform the shot. If there is large crowd that are watching him and making noises his concentration may wonder resulting in him making a fatal mistake. Also if someone has something on their mind there concentration would be on that as they would be worrying about something or they may be excited about something as opposed to concentrating on the game. Stress: if someone was stressed out then they would be worrying about something or would have other things on their mind, they could be emotional or have a lot of things to take care of and this may hinder their concentration and accuracy resulting them loosing vital points, also if someone is not paying full attention they may be susceptible to make a mistake and cause them self an injury. An example of this in a game of badminton could be that there may be a doubles game and the player may forget to call for it and get in the way of the shuttle, the other player may have tried to strike the shuttle and may accidentally hit the player. Will to win: The will to win can really affect someone, because if someone has the will to win they will most probably put as much effort as they can. Criticism: Criticism is a negative thing because a player may not have had a good game and people may have started to talk about him in an ill mannered way however the way that the player reacts to this depends on the outcome. The player may listen to the comments made about him and feel sad and loose hope in him self or the player may listen to the comments and think that he has to prove them wrong by giving more of an effort for the next match. ...read more.

At this stage you may still not be good enough to go straight into a proper game situation in which you play for points. In this situation you could add a player who is playing against you and not just giving you shots that you could return as drop shots. To begin with you could start with certain conditions with the opponent for example the opponent has to stay in the middle of his service box and one of his feet ahs to remain in one place. The opponent could then serve and you could then return this until you receive a shot that is adequate for returning as a drop shot, in this case perform the drop shot and see if the player can come forward from the middle of the court and return the shot. If the opponent returned the shot then the player would know that he still ahs to practice his shot however if the opponent did not return it the player would know that his shot is of a good standards. Also the player could play with different opponents so that he is tested against people of different abilities. This would be good because the player gets a large amount of feedback upon how good his shot is. 7. Then play a proper match The final stage of the training programme could be to play a proper match. In this match the player would be able to use a whole range of moves to try a win points. Also at the appropriate times he could perform the drop shot and see if his opponent was able to return it. There are two ways of seeing if a player is good from a match. These are if the opponent is able to hit the shots back or not or alternatively if he performs enough successful shots to win the match ...read more.