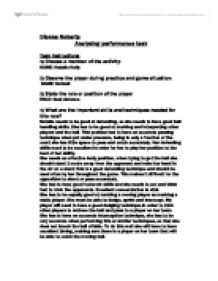 Dionne Roberts Analysing performance task Task Instructions 1) Choose a member of the activity: NAME: Natalie Kelly 2) Observe the player during practice and game situation: GAME: Netball 3) State the role or position of the player ROLE: Goal defence 4) What are the important skills and techniques needed for this role? Natalie needs to be good at defending, so she needs to have good ball handling skills. She has to be good at marking and interpreting other players and the ball. This position has to have an accurate passing technique when put under pressure, being in only a fraction of the court she has little space to pass and catch accurately. Her defending skills need to be excellent in order for her to play her position to the best of her ability. She needs an effective body position, when trying to get the ball she should stand 1 metre away from the opponent and raise her hand in the air on a slant; this is a good defending technique and should be used often by her throughout the game. This makes it difficult for the opposition to shoot or pass accurately. She has to have good footwork skills and she needs to act and think fast to trick the opponents. ...read more.

My player has a skill to be able to intimidate other players to shoot away from the goal to other players; she is able to mark a moving player but can defend better when the opponent is static. She jumps to defend a shot and has excellent concentration when defending. Natalie has good movement and balance. She can speed up for the ball and change direction while sprinting. She is flexible and shows clear signals for the ball. She can catch the ball on the move and shows a good understanding of the game. 6) Observe the player in the activity and identify and describe in detail the weaknesses of the player according to their position. Natalie tends to forget to step into passes. She needs to step into passes so that she can get more force behind the ball but seems to forget when she is being marked by the opposition. Natalie does catch well and gives her 100% effort but sometimes mis-interprets the jumps too early or too late which has sometimes caused the other team to get the ball and score a goal. Sometimes my player does not judge the right amount of strength to throw the ball with correctly. She sometimes throws to hard for short passes and too light for long passes. ...read more.

Natalie has a healthy diet, involving a lot of carbohydrates, vitamins and minerals. She tends to avoid coffee and tea, and will drink, water, pure juice and milk. Natalie does not smoke although she used to and she only drinks alcohol on rare family occasions. My player is of a muscular build; this is a positive factor because she has power and speed during games. The weather had a mild wind and was quite cool although the sun was not shining. This could affect my player's performance by making it a bit harder for her to get the ball. Although I do not think a mild wind would have such a big effect on the ball or the game. 9) What are the player's reactions and views to your findings? My player agreed to most of what I have written about her performance. She reminded me though that this was only one performance that had been analysed, other games have been better. She also told me that on this day she was not feeling to good and so her performance wasn't up to scratch. She said that she found the position she played difficult, as it is not her strongest position on the court. But over al she thinks that I have judged fairly and realistically, she is impressed with what I have written. ...read more.