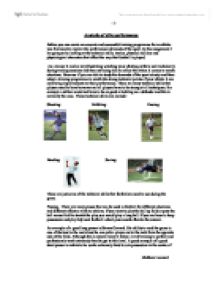 Analysis of an alite performer

Analysis of elite performance Before you can create an accurate and successful training programme for an athlete you first need to explore the performance demands of the sport. In this assignment I am going to be looking at the technical skills, tactics, physical abilities and physiological characters that affect the way that football is played. As a trainer it can be very frustrating watching your athletes perform well technically during training sessions and then not being able to reflect this when it comes to match situations. However if you are able to study the demands of the sport closely and then adapt a training programme to match the strong technical points of your athlete it can only bring improvements to their performance. There are many technical skills that players need to have however not all players have to be strong at all techniques. For example a striker would not have to be as good at tackling as a defender and this is normally the case. These technical skills can include: Shooting: Dribbling: Passing: Heading: Saving: These are just some of the technical skills that footballers need to use during the game. Passing - There are many passes that can be used in football for different situations and different effects u wish to achieve. ...read more.

If a team is settled on the result or just want to settle into the game then they can choose to keep possession. This can often annoy the opposing team and the crowd as they often want to see attacking football but by keeping possession it can be very successful if completed correctly. There are some tactics which some teams choose to use which others disagree with. One tactic could include tackling the opposing team's best player hard and injuring them so they cannot continue. This is seen unethical by many teams and they would choose not to do this, however teams will use this tactic to gain an advantage. A big tactician was Jose Mourinho; he got a lot of criticism for some of the tactics that he used however he gave Chelsea the biggest success in their history. He liked to rotate players around in different positions and make some substitutions which other people and other managers would not have agreed with. However a manager with good tactics needs to be original other wise it would not make the special. This could be how he got the name 'the special one' It is important that all athletes and teams are focused psychologically very strongly. ...read more.

Speed - speed is an obvious physical ability that all footballers should have. They need speed to be able to get to the ball before others and this applies for all positions. Strikers need to be able to outrun the defenders to get to the ball first for a goal scoring opportunity. Defenders need to be able to track back when the other team is on the attack and catch up with attackers if they have broken through. Midfield is where most of the play happens and it is where the game can be won or lost. If players are getting to the ball before the opposition then this is where a lot of the possession can be won. It takes many aspects of the game to become a good footballer. You may not need to have all of these aspects but the more you are the more successful you are likely to become. Some players are weak at some parts of the game however these are either not need or they make up for them in other areas. For example Peter Crouch is not the best technical player when the ball is at his feet; however in the air he is superior to most other players. All these areas are possible to train with and help improve so with the right training and determination a player can achieve anything. ...read more.