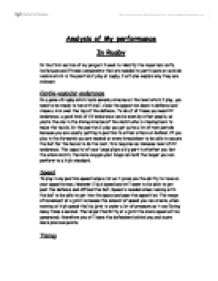 Analysis of My performance In Rugby

Analysis of My performance In Rugby In the first section of my project I need to identify the important skills, techniques and fitness components that are needed to participate at outside centre which is the position I play at rugby, I will also explain why they are relevant Cardio-vascular endurance In a game of rugby which lasts seventy minutes at the level which I play, you need to be ready to run with ball, close the opposition down in defence and chase a kick over the top of the defence. To do all of these you need CV endurance, a good level of CV endurance can be seen by other people, as you're the one in the dieing minutes of the match who is chasing back to make the tackle. In the position I play you get quite a lot of rest periods because you are usually getting in position to either attack or defend. If you play in the forwards you are needed at every breakdown to be able to secure the ball for the backs to do the rest, this requires an immense level of CV endurance. The capacity of your lungs plays a big part in whether you last the whole match, the more oxygen your lungs can hold the longer you can perform to a high standard. Speed To play in my position speed helps a lot as it gives you the ability to take on your opposite man. However I lack speed and still seem to be able to get past the defence and offload the ball. Speed is needed when running with the ball to be able to get into the space and pass the opposition. The range of movement at a joint increases the amount of speed you can create, when running at high speed the hip joint is under a lot of pressure as it oscillating many times a second. ...read more.

I am also the place kicker for my team, in a situation when I feel I can kick the ball through the posts successfully from a penalty I will attempt a kick at goal. To able to achieve the best results I need immense balance and flexibility at the hip joint so that I can produce as much power that is possible and kick the ball a greater distance and hopefully I rotate my body in the correct way so that the ball flies straight and true towards my target, timing and coordination are essential in this part of my game. This also applies when I attempt a conversion. The next section of analysing my performance is highlighting my own weaknesses and what I can do to improve this so that I can perform at a higher standard. Passing the ball out of the tackle To be able to execute this skill successfully you must have excellent timing and coordination. In a game situation when I go into the tackle and have a player in support I try to offload the ball however with a lack of composure and usually pass the ball quite erratically, causing my team-mate to knock the ball on, resulting in our team losing possession. To improve this weakness that I have always had trouble in executing well, I should take the ball to ground and consider my options: either pop the ball up to the first man at the breakdown or set the ball for the forwards to secure the ball, creating a 2nd phase of play. Cardio-vascular endurance At the beginning of a match I perform to the best of my ability. I am able to make every tackle, break through the line of defence and chase the ball if a kick is placed over the top of the defence. However when the game progresses my breathing becomes less efficient which is caused by the lack of oxygen getting into the blood supply. ...read more.

Not only would my CV endurance have increased. My muscular endurance would have also increased greatly. Many different muscle groups would have developed in such a way that allows me to perform at a higher standard for a longer space of time. My upper body strength (pectorals, biceps and triceps) will have also been greatly developed allowing me to tackle harder and drive opposing players off the ball therefore securing possession for my team and showing the opposition that I am a forceful player and this will maybe mentally dishearten the opposition creating more opportunities to score precious points. Over the six week period I have been concentrating mainly on my distribution of the ball when in a contact situation. I believe that if I were to work on this skill consistently every training session I could maintain a certain level of composure to be able to execute this skill successfully using my programme as a basis to build on, setting myself goals to achieve better results when this situation occurs. If I were to practice my place kicking on Wednesdays and Saturdays eventually I would be able to kick the ball in such a way that it flies correctly and has a greater chance of scoring points. The chance of this happening would be down to the flexibility in my hip joint to be able to generate enough power to kick the ball a longer distance, which is a key element to kicking penalties. Overall the six week training programme would benefit me as a performer as I would be able to last the whole match performing to a higher standard and practicing my skills most days of the week would also increase my playing potential because I would know what to do at the right time and execute certain skills in a much more positive manner, which would build my confidence up greatly resulting in a much better performance. "The good train hard. The best train harder" Adam Dixon 11J2 ...read more.