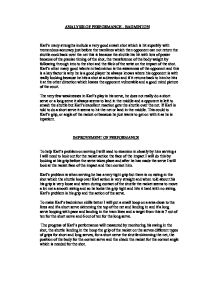 ANALYSIS OF PERFORMANCE - BADMINTON Karl's many strengths include a very good smash shot which is hit superbly with tremendous accuracy just before the tramlines which then opponent can not return the shuttle c**k back over the net this is because the shuttle his hit with lots of power because of the precise timing of the shot, the transference of the body weight by following through into to the shot and the flick of the wrist on the impact of the shot. Karl's other many good talents in badminton is the awareness of the opponent and this is a key factor is why he is a good player he always knows where his opponent is with really looking because he hits a shot at a ...read more.

If Karl is told to do a short serve it seems to hit the net or land in the middle. This could to Karl's grip, or angle of the racket or because he just wants to get on with it as he is inpatient. IMPROVEMENT OF PERFORMANCE To help Karl's problem on serving I will need to examine in closely by him serving s I will need to look out for the racket action the face of the impact I will do this by looking at his grip before the serve takes place and after he has made the serve I will look at the racket face of the impact and then correct him. ...read more.

To make Karl's badminton skills better I will put a small hoop on a area close to the lines and if a short serve skimming the top of the net and landing in and if a long serve looping with pace and landing in the tram lines and a target from this is 7 out of ten for the short serve and 6 out of ten for the long serve. The progress of Karl's performance will measured by monitoring his swing in the shot, the shuttle landing in the hoop the grip of the racket on the serves different types of grips for short and long serves, for a short serve the shuttle skimming the net, the position of the body for the correct serve and the check the racket for the correct angle which is needed for the shot. ...read more.