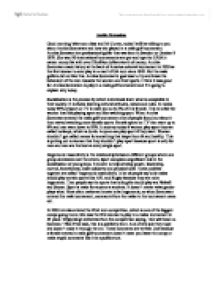 Annika sorenstam. I will be talking to you about Annika Sorenstam and how she played in a male golf tournament.

These qualities together are called 'hegemonic masculinity. A lot of people say only males should play certain sports like AFL and Rugby because they are more hegemonic. Then people say the sports that only girls should play are Netball and Soccer. Sport is made for anyone at anytime. It doesn't matter what gender plays what. Most often males are known to be hegemonic, so when Sorenstam entered the male tournament, comments from the males in the tournament came out. In 2003 Annika entered the PGA tour competition, which is one of the biggest comps going round. She was the first woman to play in a males tournament in 45 years. Viljay Singh withdrew from the competition saying, 'she will have no business.' Nick Price said, this is a publicity stunt. And others said they hope she doesn't make it through the cut. These comments are terrible. Just because a female entered a male golf tournament doesn't mean you leave the comp or make stupid comments like it is a public stunt. ...read more.

In the olden days if a female even watched any sport they were stoned to death, which is ridiculous. This was just showing to the world the power men have in comparison to women. Male dominance occurred for centuries, however as time has passed, women's position in sport has increased. And women are now seen competing in physical activities that are stereotyped as masculine activities for men. After close analysis, I believe that Annika Sorenstam strengthened the place and position of other golfers around the world because they will now have the ability to do what she did in golf and in all other sports. It was great that she entered the male PGA tour. She found out how good she was and improved her overall game at the same time. She also helped society learn that women can play mens sport it doesn't matter what gender they are. Most males are thought to be more hegemonic than women so it's going to be a long time before men and women go in a same tournament. ...read more.