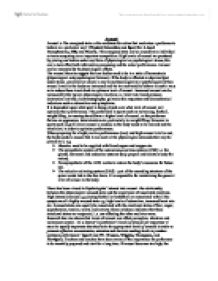 Arousal Arousal is 'the energised state or the readiness for action that motivates a performer to behave in a particular way' (Physical Education and Sport for A-level Honeybourne, Hill, and Moors). This energised state can be caused by an individual or team competing in an important competition. High levels of arousal are produced by placing our bodies under any form of physiological or psychological stress; this can in turn affect both information processing and the actual performance. Arousal can be measured by its physiological effects. The arousal theories suggest that our bodies need to be in a state of homeostasis (physiological and psychological balance). If the body is affected or deprived (put under stress- perceived or actual) in any way physiologically or psychologically then arousal levels in the body are increased and we are motivated to behave in such a way as to reduce these levels back to optimum level of arousal. ...read more.

playing football or basketball are associated with all the symptoms of a highly aroused state e.g. high levels of adrenaline, increased heart rate etc. Aroused states can equally be associated with the emotional states of fear, anger, apprehension, tension, worry, and anxiety. Some evidence indicates that these emotional states are reciprocal, i.e. one affecting the other and vice versa. Research has also shown that levels of arousal can affect perception, attention and movement control. 'As a learner's/ performer's levels of arousal are important it must be equally important that they have the appropriate levels of arousal in order to promote effective concentration, attention and decision making levels to produce optimum performance' (sport and PE- Wesson, Wiggins, Thompson, and Hartigan). Teachers and coaches have been aware of the importance for performers to be mentally prepared and alert for a long time. If arousal becomes too high, the performer can become anxious, and equally, if the level is too low they may become bored and de-motivated- both of these resulting in a negative effect on learning and performance. ...read more.

If the performer has low skill levels, they will need to attend to many details related to movement and will need to consciously process much more information. If the arousal level is even moderate, a novice may lose concentration or become anxious, and so a low level of arousal is likely to produce optimum performance. Personality- Personality types who enjoy high levels of excitement and are generally more extrovert can cope in a high arousal situation. People who are more introverted are generally likely to perform better under low arousal conditions. Catastrophe theory This theory believes that as arousal increases there is a dramatic drop in performance. We see many top sports people 'go to pieces' in the big events. The theory takes into account that our anxiety can be of two types: 1. Somatic anxiety- anxiety experienced physiologically e.g. sweating 2. Cognitive anxiety- anxiety experienced by the mind e.g. worrying about failing These interact with each other. ...read more.