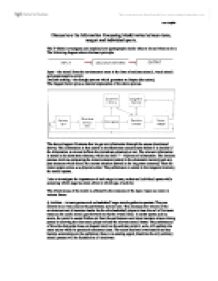 Discuss how the Information Processing Model varies between team, racquet and individual sports. The IP Model investigates and explains how sportspeople decide what to do and when to do it. The following diagram shows the basic principle. Input - the stimuli from the environment come in the form of auditory stimuli, visual stimuli and proprioceptive stimuli. Decision making - the thought process which generates an Output (the action). The diagram below gives a detailed explanation of the above process. The above diagram illustrates that we get our information through the senses (mentioned above). This information is then stored in the Short-term sensory store before it is decided if the information is relevant (affects the immediate situation) or not. The relevant information is stored in the short term memory, which can hold 7 - 10 pieces of information. The decision process involves comparing the current situation (stored in the short-term memory) and any past instances which mimic the current situation (stored in the long term memory). Then the motor output occurs as a physical action. The performance is stored in the long-term memory, the model repeats. I aim to investigate the importance of each stage in team, racket and individual sports while analyzing which stage has more effect in which type of activity. ...read more.

A performer who is at their psychological peak for performance is likely to perform more quickly and accurately. If they are under-prepared they will be slow and careless. If they are stressed they will make rushed decisions and make the wrong choice. In conclusion, it is evident that the IP Model is most complex when applied to team sports. Team games are externally paced and occur in an open environment. It is most difficult for the team player to make the correct decision as he has to consider many variables. The stimuli available are weaker, making the relevant information less evident. The number of relevant stimuli is greatest in team games, making the decision process harder. The IP Model is simplest in individual sports as there are a small number of possible responses (usually one - 100m race start). The stimuli are strong in individual sports making the correct decision an easier one. The player is most likely to anticipate the outcome in individual and racket sports as there are fewer outcomes possible. The more experienced player will be able to anticipate better. How simple the IP Model will be for a sport depends mostly on the position of the sport on the Open --- Closed continuum. The more closed the activity is the simpler the model becomes. With fewer variations there are fewer outcomes to consider. ...read more.