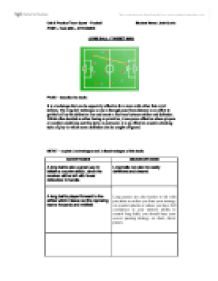 LONG BALL / TARGET MAN PASS - describe the tactic It is a technique that can be especially effective for a team with either fast or tall strikers. The long ball technique is also a through pass from distance in an effort to get the ball by the defensive line and create a foot race between striker and defender. Whilst often derided as either boring or primitive, it can prove effective where players or weather conditions suit this style; in particular, it is an effective counter-attacking style of play in which some defenders can be caught off-guard. MERIT - explain 3 advantages and 3 disadvantages of this tactic ADVANTAGES DISADVANTAGES A long ball is also a great way to initiate a counter attack, since the receiver will be left with fewer defenders to handle. ...read more.

This parallels the long through ball tactic explained below. In the example, an attack by the black team has broken down and ended up in the hands of the white goalie. By kicking a long through ball for the furthermost white player (left up there in the hope of this situation - this is the "break" mentioned above), the player has a chance of scoring as he should have evaded the defence if he is fast enough. MERIT - explain 3 advantages and 3 disadvantages of this tactic ADVANTAGES DISADVANTAGES The counter attacking style is the easiest to organize and is the best guarantee of getting a result. As the probability of scoring decreases sharply when the opponent has managed to organise their defence. ...read more.

They're not used so much centrally, because it's tough to make it happen in an area crammed with opponents that can either intercept the pass, or block the attacker or the "wall" player. MERIT - explain 3 advantages and 3 disadvantages of this tactic ADVANTAGES DISADVANTAGES The one-two can be employed on large and small scales, whether it's used to cross half the field or just to slip around a knot of defenders. Can leave gaps on the pitch if this skill is not performed properly. One of the best things about the one-two is that it enables the team to move up together. It's really difficult to do in a competitive match. Used well, it is extraordinarily effective and can propel the ball deep into the scoring half with plenty of support from friendly players. ?? ?? ?? ?? Unit 8: Practical Team Sports - Football Student Name: Josh Currie P1/M1 - Task 2(B) - ATTACKING ...read more.