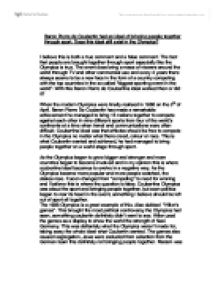 Baron Pierre de Coubertin had an ideal of bringing people together through sport. Does this ideal still exist in the Olympics? I believe this is both a true comment and a false comment

Baron Pierre de Coubertin had an ideal of bringing people together through sport. Does this ideal still exist in the Olympics? I believe this is both a true comment and a false comment. The fact that people are brought together through sport especially like the Olympics is true. The event does bring a mass of viewers around the world through TV and other commercial use and every 4 years there always seems to be a new face in the form of a country competing with the top countries in the so called "biggest sporting event in the world". With this Baron Pierre de Coubertins ideal worked then or did it? When the modern Olympics were finally realised in 1986 on the 5th of April. Baron Pierre De Coubertin has made a remarkable achievement he managed to bring 13 nations together to compete against each other in nine different sports from four of the world's continents at a time when travel and communications were often difficult. ...read more.

The 1936 Olympics is a great example of this. Also dubbed "Hitler's games". This brought the most political controversy the Olympics had seen, something coubertin definitely didn't want to see. Hitler used the games as a display to show the world the strength of Nazi Germany. This was defiantely what the Olympics weren't made for, taking away the whole ideal what Coubertin wanted. The games also caused segregation, Jews were excluded from selection from the German team this definitely not bringing people together. Racism was also brought about through these Olympics through the black athlete Jesse Owens who in the end became nothing short of an Olympic legend as he upset Hitler and the whole of Germany by beating the Blonde Lutz Long, this infuriating Hitler. With all these happenings, it threw coubertins ideal of bringing people together and done the complete opposite of moving people away from each other. ...read more.

This of course opens a wider audience with more people involved but in turn I believe this commerciality doesn't have a place in sport. Sport should belong with sport, where commercial should belong in commercial places like billboards and the papers. Coubertins ideal of bringing people together has happened but in an all negative way. The Olympic spirit seems to be put to the side, where money comes in nowadays. Drug use, cheating, poitical interference the Olympics has seen the lot.the two c's has taken over "The biggest sporting even in the world" controversy and commercial. People have been brought together but all in the wrong manner from what Coubertin wanted and how it used to be. In my opinion if the Olympics carry on this way the fire of the Olympic spirit will soon die out. By Matthew McNulty ...read more.